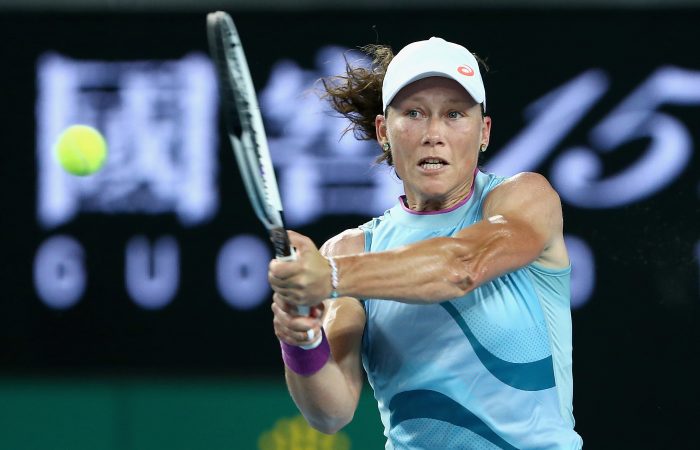 Sam Stosur’s 19th Australian Open campaign started promisingly, advancing to the second round at Melbourne Park for the first time in six years. But the 36-year-old won’t be going any further, this year at least.

American Jessica Pegula eliminated the world No.112 in a second-round clash at Margaret Court Arena this evening, posting a 6-0 6-1 victory.

The world No.61 raced through the opening set in 25 minutes, hitting eight winners to Stosur’s four.

A patriotic crowd was willing on Stosur, who had never previously lost a 6-0 opening set in an Australian Open match. But Pegula was rock solid and confidently dictating play.

Stosur finally got on the board in the third game of the second set, holding serve with her first ace.

However, there was no stopping Pegula’s momentum. The 26-year-old American, who defeated two-time Australian Open champion Victoria Azarenka in the opening round, closed out victory in 50 minutes.

Stosur’s tournament is not completely over, set to play mixed doubles with fellow Australian Matthew Ebden.

The world No.1 is on a six-match winning streak and considered one of the title favourites – but she’s looking no further ahead than a third-round meeting with No.29-seeded Russian Ekaterina Alexandrova on Saturday.

“There are no easy matches,” Barty said. “Every time you walk on the court, you have to try and be able to bring your best tennis to be able to compete with everyone. That’s just the level that there is now on the women’s side.”