World No.1 Ash Barty storms into the second round of the Australian Open without the loss of a single game. 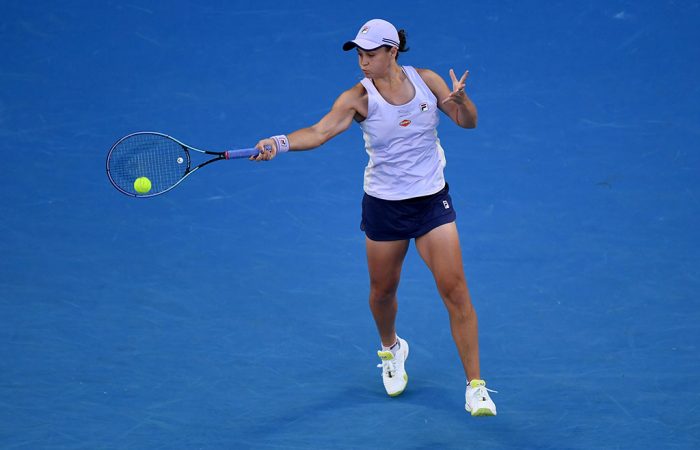 For somebody who loves every minute competing before her home crowds at Rod Laver Arena, Ash Barty certainly worked fast.

The world No.1 took just 44 minutes to overcome Danka Kovinic 6-0 6-0 in the first round of the Australian Open, the top-seeded Australian completely overwhelming the world No.82.

Barty claimed every point in the first four games, dropping only four points in total in the 19-minute first set.

And while the 26-year-old from Montenegro at least extended some service games slightly longer in the next stanza, Barty remained in full command.

“I wanted to go out there and almost take the sting, take the pepper out of the match a little bit and get it on my terms as much as possible right from the get-go and make it feel like she had a real mountain to climb,” said Barty, who ultimately lost only 10 points for the match.

“I think that was probably the most pleasing overall is that right from the start I set the tone and was able to run away with it.”

Barty hit 10 winners to three from Kovinic and recorded only five unforced errors to the her opponent’s 28, prompting the question of whether she’d ever started a Grand Slam so well.

“Scoreline-wise, yes,” said Barty. “I think the processes and the things we go through before a match and trying to execute that, that’s always a challenge. I felt like tonight I had that spot on, which was really pleasing, to be able to roll with the momentum throughout the whole match was really good.”

It's a real honour and privilege to watch you compete @ashbarty 🙏 #AO2021 | #AusOpen pic.twitter.com/SUleXszHo9

The commanding performance followed victory at last week’s victory at the Yarra Valley Classic, where Barty defeated Garbine Muguruza in the final to lift the ninth singles trophy of her career.

“So I think, you know, regardless of what happens on any given night, we wake up the next day and go back to work and try and get better again.”