Ash or Dash? That's the big question for Aussie tennis fans ahead of today's Australian Open 2021 second-round showdown between two of the nation's most popular players. 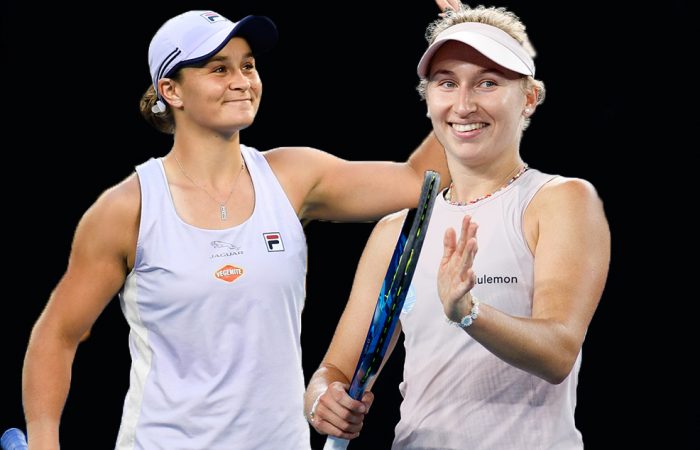 Three weeks ago, Ash Barty and Daria Gavrilova were among a cohort of Australian players practising at the Xavier College tennis courts in Melbourne ahead of the Australian Open.

Such is Gavrilova’s respect for the world No.1 and her Billie Jean King Cup team-mate, she was hesitant to even ask Barty for a lift after one of their training sessions.

“I was scared,” Gavrilova related after her first-round win on Tuesday. “I was, like, ‘Ash, can you please give me a lift?’ She’s like ‘Oh my God, you’re an idiot. Like, let’s go’.”

Today, though, they become foes and will battle for a place in the Australian Open third round.

“I always enjoy testing myself against other Aussies,” Barty says. “It will be a ripper.”

Gavrilova isn’t scared, this time, about the challenge of facing her in-form compatriot.

“It’s going to be really fun,” she says.

[1] Ash Barty (AUS) v [WC] Daria Gavrilova (AUS)
Women’s singles, second round, Rod Laver Arena, day session, second match
For the first time in her career, Ash Barty will play a fellow Aussie in a Grand Slam singles match. Gavrilova, a former world No.20 who is currently ranked No.387 and returning from a year-long injury lay-off, is excited about the match-up. “I love the big show and I’m sure a lot of people are going to come out and watch,” the 26-year-old says. Gavrilova describes the world No.1 as “someone I definitely look up to”. Barty’s only previous loss to her Billie Jean King Cup team-mate was on clay in 2017.
Head-to-head record: Barty leads 3-1
Last meeting: Barty won 6-1 6-2 (Madrid, 2019)

[WC] Thanasi Kokkinakis (AUS) v [5] Stefanos Tsitsipas (GRE)
Men’s singles, second round, Rod Laver Arena, day session, third match
Although this is their first meeting, these two are family friends and have practised together. “Both being Greek, we get along,” Kokkinakis says. The 24-year-old Aussie wildcard, who expressed relief after recording his first Australian Open main draw win in six years, is looking forward to challenging one of the title favourites. “It’s going to be exciting,” Kokkinakis says. The world No.267 won his most recent match against a top-five opponent, beating Roger Federer in Miami in 2018.
Head-to-head record: First career meeting

[WC] Alexei Popyrin (AUS) v Lloyd Harris (RSA)
Men’s singles, second round, Court 3, second match
This is the second consecutive Grand Slam tournament these two players have met – but this time, 21-year-old Popyrin is determined to defeat the world No.91. “I know it’s going to be a very difficult match for me, but I’m a different player,” Popyrin says. “I’m different mentally.” The world No.113 has demonstrated his improved mental resilience to save match points in two of his past four matches, including a career-defining win over world No.15 David Goffin in the opening round.
Head-to-head record: Harris leads 2-0
Last meeting: Harris won 6-4 6-4 7-6(7) (Roland Garros, 2020)

[WC] Christopher O’Connell (AUS) v Radu Albot (MDA)
Men’s singles, second round, Court 3, third match
A major opportunity beckons for two players seeking to advance to the Australian Open third round for a first time. O’Connell, a 26-year-old wildcard ranked No.121, scored his first top-50 win in the opening round. Contesting only his fourth Grand Slam main draw, O’Connell’s confidence is rising. “The more I play these type of events, the better I feel out there,” he says. His next opponent is the world No.85, a 31-year-old Moldovan who upset No.13 seed Roberto Bautista Agut in the first round.
Head-to-head record: First career meeting

[21] Alex de Minaur (AUS) v Pablo Cuevas (URU)
Men’s singles, second round, Margaret Court Arena, night session, first match (from 7pm AEDT)
After a solid opening-round win, De Minaur is determine to maintain his focus and continue building on his impressive momentum. Yet the 21-year-old, who is looking to advance to the Australian Open third round for the second time in his career, is wary of his next opponent. The 35-year-old Cuevas, who is currently ranked No.72, has been as high as world No.19. “He’s a very tough opponent, very solid. He’s going to make me play a lot of balls,” says Australia’s top-ranked man.
Head-to-head record: First career meeting

[WC] Sam Stosur (AUS) v Jessica Pegula (USA)
Women’s singles, second round, Margaret Court Arena, night session, second match
Contesting her 19th Australian Open, Stosur has an edge in experience against her 26-year-old opponent playing in her second. But the 36-year-old knows Pegula is a difficult opponent, as the world No.61 proved in a first-round upset of two-time AO champion Victoria Azarenka. “We have played a couple of times. She hits a good ball. Flat, hard,” notes Stosur. “I’ll have to be on my game.” The world No.112 is aiming to advance to the AO third round for the seventh time in her career – and first time since 2014.
Head-to-head record: Tied at one-all
Last meeting: Stosur won 6-3 6-1 (Strasbourg, 2019)

[WC] Lizette Cabrera (AUS)/Maddison Inglis (AUS) v Renata Voracova (CZE)/Yafan Wang (CHN)
Women’s doubles, first round, Court 5, first match (from 11am AEDT)
This is the first time that close friends Cabrera and Inglis, who are both aged 23 and train together in Brisbane, have teamed up at a Grand Slam. Cabrera is competing in an AO women’s doubles draw for a fourth time, while Inglis is contesting her third.

[WC] Alex Bolt (AUS)/Jordan Thompson (AUS) v Vasek Pospisil (CAN)/Denis Shapovalov (CAN)
Men’s doubles, first round, Court 14, third match (not before 2.30pm AEDT)
Teaming up for the first time at a Grand Slam, long-time friends Bolt and Thompson face a tough opening-round test. Pospisil is a former Wimbledon doubles champion and Shapovalov is one of the most exciting 21-year-olds on tour.

[WC] Daria Gavrilova (AUS)/Ellen Perez (AUS) v Ons Jabeur (TUN)/Christina McHale (USA)
Women’s doubles, first round, Court 5, fourth match
Perez, a 25-year-old from Sydney, is the world No.48 and the top-ranked doubles player in this first-round showdown. This is the first time she has partnered 26-year-old Gavrilova, who is one of her closest friends on tour.

[WC] Thanasi Kokkinakis (AUS)/Nick Kyrgios (AUS) v Lloyd Harris (RSA)/Julian Knowle (AUT)
Men’s doubles, first round, Court 3, fifth match (not before 6pm AEDT)
Best friends Kokkinakis and Kyrgios are teaming up at the Australian Open for a third time and for the first time since 2015. They have a 0-2 win-loss record together at the tournament, will it be third-time lucky today?