Judy Tegart Dalton and Kerry Reid, who played a courageous role in ensuring equality for women’s tennis, receive a special honour at AO 2021. 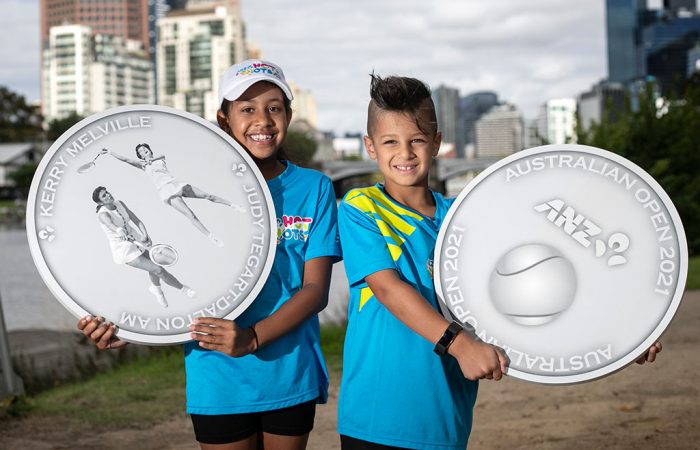 For a single coin, the value it symbolises is priceless.

In partnership with ANZ, the commemorative coin produced for Australian Open 2021 features Judy Tegart Dalton  and Kerry Reid, former Grand Slam champions who each played a pivotal role in ensuring equality for the women’s game.

“I’m thrilled that Kerry and I will inspire the next generation of young tennis players through our achievements,” said Dalton of the coin that will be tossed by ANZ Tennis Hot Shots participants at the start of each AO 2021 arena match.

“It is a privilege that we have been able to be involved in their special Australian Open moment.”

Reid, who was born in Australia but has lived in America since retiring from professional tennis, was equally touched when she learned of the Australian Open tribute.

“It was a great surprise,” she related. “It really is a great honour and especially that it’s in my home town Melbourne. That means a lot to me.”

It also means a lot that through the commemorative coin, the impact that the courageous Australians made in helping form the Original Nine in September 1970 is made clear.

Led by the pioneering Billie Jean King, nine female players had signed an agreement to establish a breakaway tour that would eventually become the WTA.

“We could have been in trouble for doing what we did. We made a lot of breakthroughs for women, especially in tennis.”

Grand Slam heights were a feature of each woman’s career. Dalton was runner-up at 1968 Wimbledon and a winner of eight doubles titles, while Reid triumphed at the 1972 US Open, Australian Open 1977 and  lifted three major doubles trophies.

Alongside those major highlights, both Australian women list their role in the Original Nine as career high points.

“I suppose from a personal point of view, getting to the final of Wimbledon singles was a real highlight,” said Dalton, who also fondly recalls representing Australia in winning Fed Cup teams.

“Also, I think, having been a member of the Original Nine. We basically changed the history of the game.”

The fact that the commemorative coin will feature so prominently at Australian Open 2021 also underlines the depth of progress made.

Dalton related that after forming the breakaway group, she and Reid were initially ostracised by Australian tennis officials.

“Kerry and I couldn’t play any tournaments at all in Australia that season and we couldn’t use Australian products or anything,” said Dalton, who was unable to play with her Slazenger racquet that year.

It is unsurprising then, that when asked what advice they would give to members of the Coin Crew – each of whom will be gifted the limited-edition coin to remind them of the once in a lifetime opportunity – Dalton and Reid each reference both commitment and hard work.

“I just think that they need to be dedicated and work hard. (There are) so many opportunities now. It’s such a great game,” said Reid.

“We worked hard to get where we got – it just shows that if you work hard, you can get where you want to get.”

Dalton good-naturedly points to the importance of practising the coin toss (“It’s all in the thumbs,” she laughs) before turning attention back to the honour of featuring on the coin itself.

“It’s fantastic that we’re being recognised. It was really lovely that Kerry and I, being the two Australians in the Original Nine, that Tennis Australia recognised this,” Dalton beamed.

That’s especially true after plans for the group to reunite with special 50-year celebrations at 2020 Grand Slams were thwarted due to the pandemic.

At Australian Open 2021, Dalton and Reid will instead be there in spirit – just as they have been as women’s tennis, helped by their pioneering efforts, has gone from strength to strength in the past 50 years.