Australian wildcard Alex Bolt has made a winning start to his Australian Open 2021 campaign. 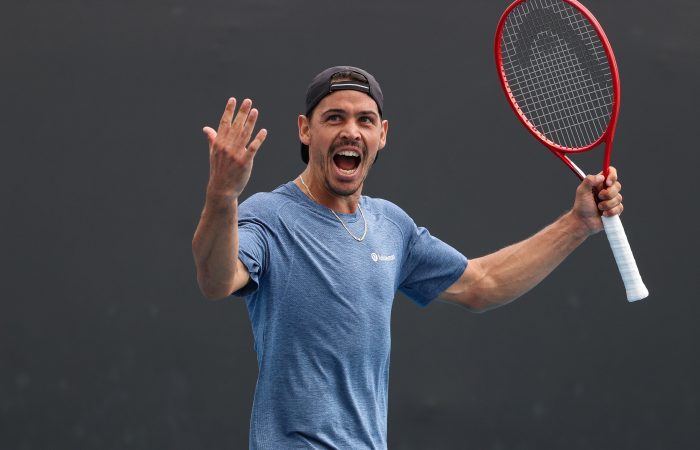 Alex Bolt has advanced to the second round at Australian Open 2021.

It is Bolt’s first top-100 win since last year’s Australian Open – and means the 28-year-old South Australian is through to the tournament’s second round for a third year in a row.

“I’m super pleased getting through my first round,” Bolt said. “It’s always tricky in a best-of-five sets match, trying to stay focused for a long period of time. I’m just happy with the way I’m playing at the moment.”

Bolt made a brilliant start against the world No.89, racing ahead 5-0 to put the pressure on his higher-ranked opponent.

The world No.174 meant business, taking a two-sets-to-love lead after only an hour on court. Bolt’s firepower was proving too much for Gombos to handle, securing the second set with his 13th winner of the match.

But the momentum changed in the third set, with Gombos forcing the match into a fourth set.

“I was a little bit annoyed with myself because I felt like I was in control of the match,” Bolt admitted.

He refused to let this rattle his confidence though, continuing to play his aggressive game to establish a 3-0 advantage early in the fourth set.

“(I) recomposed myself, came out and played a pretty good fourth set,” Bolt said.

The Australian closed out victory after two hours and 14 minutes on court. He faced only two break points for the match, finishing with 11 aces and 31 winners.

The South Australian faces No.18 seed Grigor Dimitrov  in the next round.

“It’s going to be a tough battle. I just can’t wait to get out there and play,” Bolt said.

Bolt was one of five Aussie winners today, with James Duckworth, Nick Kyrgios, Bernard Tomic and Ajla Tomljanovic also advancing to the second round.