World No.1 Ash Barty is through to the Yarra Valley Classic quarterfinals at Melbourne Park. 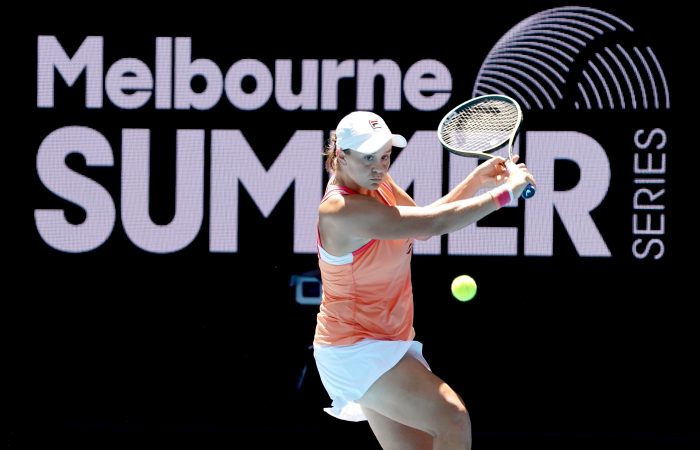 If Australia’s Ash Barty was looking for a test on the eve of the Australian Open, she got one today.

The world No.1 had to fight hard to overcome world No.52 Marie Bouzkova and earn her place in the Yarra Valley Classic quarterfinals.

Barty made a blistering start to the third-round match at Margaret Court Arena, firing 11 winners to the Czech’s two to take the opening set without losing a game. But she could not maintain such impressive momentum.

“She makes a lot of returns and makes you work hard on every single service game,” Barty noted of her opponent.

Bouzkova levelled the match and as the pair traded early breaks in the third set, Barty’s chances were looking dicey.

But, the top-seeded Barty showed her class and experience in the final stages to close out a 6-0 4-6 6-3 victory after just over two hours on court.

“It’s always nice to test the legs and get into those tougher matches obviously,” Barty said. “There were ebbs and flows of momentum, but happy to come away with it in the third and change things a little bit to come back my way.”

American Shelby Rogers awaits in the quarterfinals. The world No.60 has eliminated two seeded opponents (No.12 seed Fiona Ferro and No.7 seed Petra Martic) so far this week. Barty won their only previous meeting, in the Australian Open 2017 second round, in straight sets.

“Shelby has always had the ability. She’s got a big game, an exceptional game,” Barty noted. “She’s a big ball striker, likes the ball on her terms. So I think I’ll have to have my running shoes on and try and neutralise as best that I can, as often as I can, to then turn it back on my terms.”

Barty is also into the doubles quarterfinals, advancing alongside American partner Jennifer Brady. Teaming up for the first time, the pair have bonded over an iconic Australian food.

“I actually organised a jar of Bartymite for Jen, so she loved that. She’s a converted Vegemite fan, which is always good,” Barty said. “Now just got to get her to try it with avocado on toast and she’ll be fine.”

Ellen Perez’s run of much-needed good luck was short lived, with the Australian unable to complete her opening round singles match today in the Grampians Trophy.

Following a second-round loss in Australian Open qualifying in Dubai last month, the 25-year-old missed Tennis Australia’s chartered flight back to Australia after showing COVID-19 symptoms. Perez later tested negative and was able to make her way home to Australia, but due to her late arrival was required to complete 14 days of hotel quarantine without any practice.

Released from quarantine last night, Perez’s fortunes looked to be changing when she moved into the draw as an alternate following the late withdrawal of American Alison Riske.

However, a chronic back injury forced Perez to retire against American Ann Li after 43 minutes on court.

“Going from zero to 100, obviously it’s just really flared up,” Perez said of her back. “Coming straight out of quarantine and right on the court was probably not my smartest move, but we learn.”