Winning Barty back in business

Ash Barty makes a comfortable return to singles competition in Melbourne, with smooth progress into the Yarra Valley Classic third round. 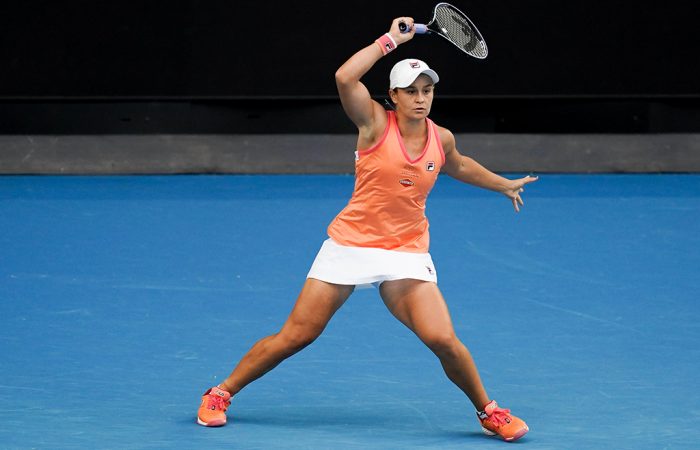 Back to business as she claimed a first victory at the Yarra Valley Classic, Ash Barty was also back where she belonged.

Almost a year since contesting her last official singles match, the world No.1 took 78-minutes to overcome Ana Bogdan 6-3 6-3.

“Overall I felt pretty good. I think Ana did an exceptional job in making me play to a very high standard. I knew right from the first point I was going to have to be ready tonight and switched on straightaway,” said Barty of the world No.93 Bogdan.

“(I’m) obviously happy to come through reasonably unscathed and roll with the momentum pretty well.”

Hitting 22 winners compared to 11 from the Romanian, Barty easily managed the only break point she saved while serving for the win.

It validated the hard work completed with coach Craig Tyzzer in her time away from competitive tennis, Barty encouraged that it showed amid the pressure of a match.

“I thought it was solid throughout the whole night.

“Of course, there are always things I’m looking to improve after every match, after every performance. But without a doubt, happy with how it went tonight.”

Barty was equally happy to embrace some enthusiastic supporters, the world No.1 admitting it was an element of competing that she’d missed.

“I’m very fortunate and very lucky and grateful to be able to play in front of a crowd, particularly here in Victoria. I know how tough it’s been for so many Melburnians over the last 12 months. I really feel for them,” she commented.

“I feel like this is an opportunity for me just to be really happy on the court, enjoy it, enjoy the experience.

“And when I look up or when I hear young boys and girls, when I hear them in the crowd, it always makes me smile no matter how the match is going, no matter the result, knowing they are enjoying it just as much as I am.”

Barty will next enjoy that experience in the third round against Marie Bouzkova, a world No.52 Czech.

“I think being able to now get another opportunity tomorrow to continue to work on things and build to what will hopefully be a long and successful season will be really good,” she said.

There was also a happy day out for another high profile Australian, Daria Gavrilova combining with world No.2 Simona Halep to progress to the Gippsland Trophy doubles second round.

Gavrilova and Halep defeated the Swiss-Czech duo of Belinda Bencic and Barbora Styrcova, and will face top seeds Gabriela Dabrowski and Bethanie Mattek-Sands, from Canada and the US respectively, next.

In the Gippsland Trophy singles event, Australia’s Destanee Aiava bowed out to Germany’s Laura Siegemund 6-2 6-2 in the second round.