Destanee Aiava kicks off her 2021 season at the Gippsland Trophy knowing the opportunity to return to professional competition is not to be taken for granted. 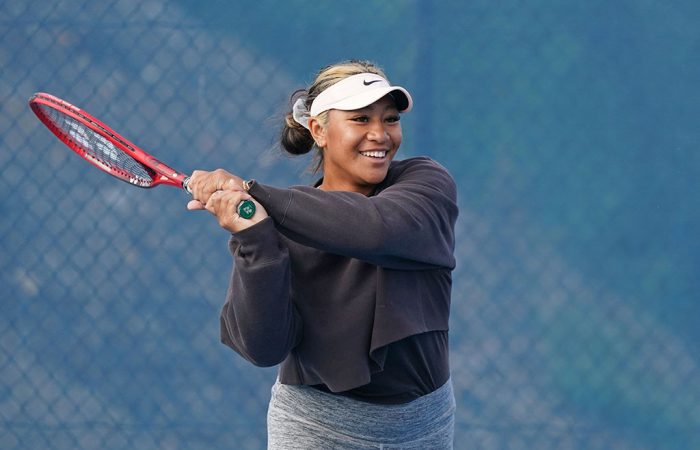 Soon after completing an intense hitting session at Melbourne’s Xavier College, Destanee Aiava is asked how it feels to be training alongside her fellow Australians again.

But the hard work had in fact never stopped for Aiava in the professional tour shutdown, the Melburnian explaining that despite being unable to contest international tournaments last year, there was plenty of time spent on court in Australia.

“I’ve been hitting this whole time, so it’s been non-stop training since COVID hit,” she told tennis.com.au.

There were multiple rewards in that approach for the 20-year-old, a winner of three UTR Pro Tennis Series events in 2020.

Aiava was one of eight Australian women subsequently awarded an Australian Open 2021 wildcard.

On Monday, she also makes her 2021 WTA debut against Chloe Paquet, a world No.187 Frenchwoman, in the first round of the Gippsland Trophy.

“I haven’t really had much of a break, but it feels good to be training and preparing for the AO and the lead-in tournaments,” Aiava added.

The preparation is more than just the physical kind for the 20-year-old, who acknowledges that a rare year without travel also allowed for some mental restoration.

“I’ve gotten the chance to catch up with my family for a longer period of time,” said Aiava.

“I’ve been in Australia the whole of last year as well, so I think that was a good opportunity for me to just be centred in one place more consistently.”

It was equally a time for Aiava to reflect on her many opportunities, the Australian having earlier become the first 2000s-born player to win a WTA main draw match.

At just 16, she was also the first from her age group to contest a Grand Slam main draw at Australian Open 2017.

“(I’ve learned) not to take anything for granted,” stressed Aiava. “Just the freedom we had, just to be able to go out without masks or the limit of people for gathering and stuff.

“I think we took it for granted, our jobs as well.”

Competing before her home crowds in Melbourne is therefore an opportunity that Aiava enthusiastically embraces.

“This is the fourth time in the main draw of the Aussie Open so I’m really looking forward to it,” said Aiava, who memorably held set points against Simona Halep in the first round of Australian Open 2018.

“It’s my favourite Slam, especially being from Melbourne as well … I’m pretty excited,” she said.

Olivia Gadecki has made a memorable debut in a WTA main draw, the unranked Australian pushing world No.63 Bernarda Pera to three tight sets in the first round of the Gippsland Trophy on Sunday.

The 18-year-old from Queensland was all composure as she seized the opening set in a tiebreak and secured an early break of serve in the second to lead her vastly more experienced opponent 7-6(2), 2-0.

After wrestling back momentum in that set, Pera battled for two hours and 18 minutes to overcome the young Australian wildcard 6-7(2) 6-3 6-3.

Astra Sharma, meanwhile, had a chance to serve for victory against Kaia Kanepi, the current world No.94 and a six-time Grand Slam quarterfinalist.

The West Australian led Kanepi 6-1 5-4 when she surrendered her first service break of the match.

Eventually converting five of her nine break point opportunities, the Estonian went on to secure a 1-6 7-5 6-2 victory in just over two hours.

In the first completed match at the Gippsland Trophy, Arina Rodionova exited in straight sets to Caroline Garcia.

Tomljanovic takes to the court

Ajla Tomljanovic, the top-ranked Australian woman in the Gippsland Trophy field, will play her first match of 2021 on Monday.

The world No.69 faces France’s Alize Cornet for a second time. Tomljanovic won their only other match at Indian Wells in 2019.