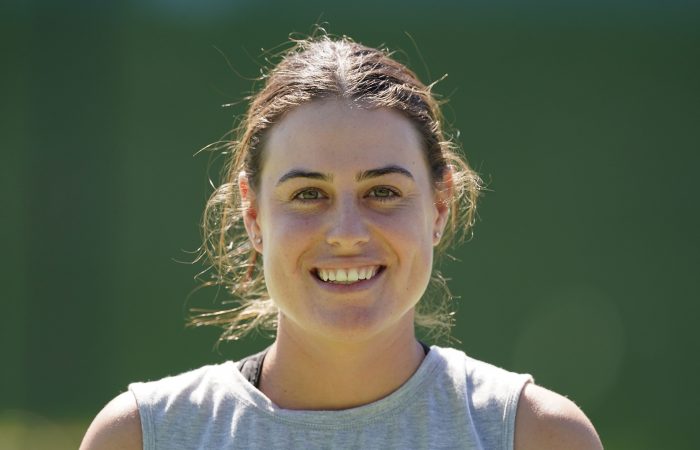 While at a training session in Melbourne earlier this week, Kim Birrell reflected on her biggest lessons from the past 12 months.

“Don’t take anything for granted and live in the present, because you never know what’s going to change or what’s around the corner,” the Gold Coast local told tennis.com.au.

“I’ve definitely learnt a lot from last year, I think everyone else did too. You just never, never know what is going to happen, so you have to try make the most of every moment while you can.”

It was a mature and measured response from the 22-year-old – and one that has already proven very true.

It is an unexpected bonus for Birrell, who had been preparing to focus on doubles at Melbourne Park this year.

She had hoped to make her long-awaited singles return at the Australian Open 2021 qualifying event in Dubai earlier this month, but had to forgo the opportunity due to illness.

It was another setback in a run of many for Birrell, who has undergone two elbow surgeries in recent years.

Her second surgery, in July 2019, stalled impressive momentum. Birrell had peaked at a career-high ranking of No.154 in May that year. This followed a remarkable Australian summer, where Birrell scored her first top-10 win against Daria Kasatkina in Brisbane. She then advanced to the third round at the Australian Open, defeating seeded Donna Vekic in the second round.

After recording three top-50 wins during January, the then 20-year-old represented Australia in the Billie Jean King Cup.

However, Birrell has not played a professional event since Wimbledon 2019.

“It’s been a long time, so I’m super pumped,” she said, with a big smile, of her impending return.

While sidelined during last year’s Australian Open, Birrell joined Tennis Australia’s media team. She worked as a roving reporter around the grounds at Melbourne Park, interviewing fellow players and special guests. She also wrote about her experience for Australian Tennis Magazine.

“It was a really interesting experience,” she said. “I’m really glad I could experience a different side of tennis, to see what goes on behind the scenes and how much hard work everyone puts in to make it so good for us players.

“I kept saying ‘I can’t believe how tiring this is’. I was working really long hours and by the end of each day I would be exhausted, even more than when I was playing.

“But I also had a lot of fun. Even though I wasn’t on court and I wished that I was, I was still really glad I was amongst it. I didn’t feel like I was missing out too much. With that being said, I’m really glad to be back this year playing and doing what I love.”

Birrell is planning to team with Melbourne’s Jaimee Fourlis in doubles at Australian Open 2021. It will be their second Australian Open appearance together, having also combined in 2018.

The 21-year-old Fourlis underwent a shoulder reconstruction during 2020 and their shared experiences of overcoming injury has further strengthened their friendship.

“We know each other really well, so I think we’re going to play well together,” Birrell said.

“We’re so excited just to have the opportunity to play. We’ll see how it goes. We definitely won’t be taking it for granted. When we step out onto the court we’ll put everything we have into, hopefully, winning. We’re just going to enjoy it a lot, have a lot of fun and fight really hard.”

It’s an attitude Birrell will now adopt on the singles court too.

The world No.745, who has dreamed of a return for many months, is thrilled her perseverance is about to pay off.

Her singles comeback, now happening on the sport’s biggest stage and at her favourite tournament, is certainly a moment to treasure.