Ash Barty: “It’s fantastic to be back”

Ash Barty pushes Simona Halep the full distance in her first competitive match in almost a year at A Day at the Drive in Adelaide. 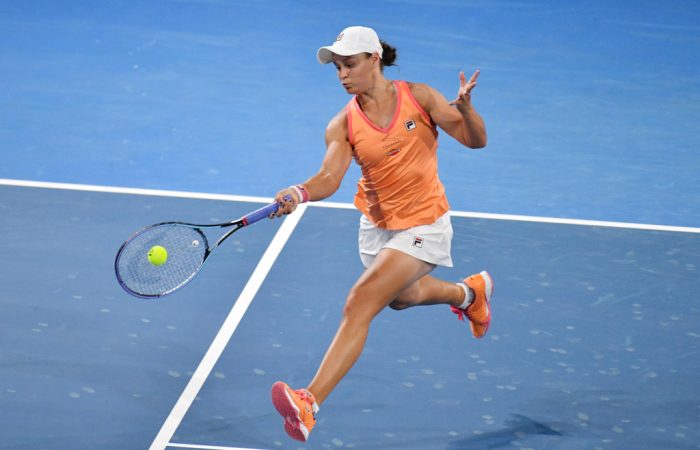 If Ash Barty couldn’t quite manage a win in her long-awaited comeback to a competitive setting, the world No.1 provided a tantalising glimpse of the possibilities as she pushed Simona Halep to a decisive match tiebreak.

In a high-quality battle between the world’s top two players at A Day at the Drive in Adelaide, Halep emerged with a 3-6 6-1 [10-8] victory.

“Ash doesn’t look like she didn’t play last year,” said the smiling Romanian. “So well done. It’s going to be a great fight always when I play against her.”

Returning to a competitive setting for the first time since February last year was a victory of sorts in itself for Barty, who was delighted to compete before 4000 fans in Adelaide.

“It’s absolutely fantastic to be back. I genuinely missed this so much,” said Barty, who lifted her eighth professional singles trophy at the inaugural Adelaide International last year.

“It’s just been great to be back. I’ve been getting a little bit impatient these past two or three months, getting ready to play.”

Barty will have her next opportunity to do so at the Yarra Valley Classic at Melbourne Park from Sunday, where the top seed she receives a first-round bye.

The Australian will hope to build on the form that was evident in the first set against Halep, in which she claimed a critical break of serve in the sixth game and soon claimed a 6-3 lead.

There was another break point for Barty in the first game of the second set, and while unforced errors would eventually factor as the match progressed, her power, timing and trademark variety were all strong.

With the intensive training block that began last October was clearly beneficial, Barty also noted that the long-awaited match play delivered many rewards.

“I’ve trained over the last few months but nothing can replicate what we just did out here today and there’s a little bit of execution of course that we’d like to get right, but I just enjoyed it so much,” she said.

“I think that’s the most important thing – when you come back out on the court, you love what you do.”

That enjoyment will be paramount as Barty looks ahead to an eighth appearance in the Australian Open, starting on 8 February.

“I’m excited to get started, and if it’s not good next week it might be the week after,” she said.

“I’ll just keep chipping away, trying to do the best that I can each day.”