Delivering welcome boosts of happy hormones, here’s why tennis is not only good for your physical health but will also elevate your overall wellbeing. 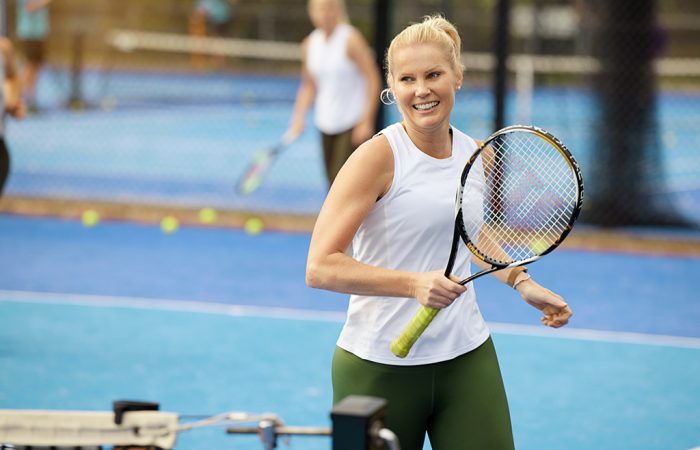 We often hear words like serotonin and endorphins when talking about the benefits of exercise – and anyone who’s gone on a morning jog has likely experienced the “runner’s high” they give you.

But besides simply making you feel good, why are these chemicals important?

Serotonin, the body’s “happy hormone,” is made within the body, and kicks in after roughly half an hour of exercise.

“From a mental health point of view, if you’re out exercising and you’re out generating the serotonin and the endorphins, which are neurotransmitters, you get a better sense of who you are at that point in time,” Robertson relates.

“Rather than sitting down, or being in the dumps or not being motivated, the body generates this feel-good procession of chemicals.”

Not only does serotonin improve mood, it also regulates sleep and aids in digestion. Endorphins, meanwhile, reduce the brain’s pain perception, effectively acting as natural analgesic.

The best news is, you don’t need to be a fitness fanatic to reap these benefits from exercise, either.

“It doesn’t have to be super physical, so tennis is a really good activity,” Robertson says.

“It can just be having general hits back over the net with one, two or three other people, playing doubles. … You can get it through gardening, or walking – gentle exercise.”

Also key, Robertson says, is getting out and about.

“Once you’re outside, you’re then exposed to fresh air, sunlight and all the benefits that come with that,” he says.

“Just being in nature, getting out with other people, even to experience things like the wind – it does sound really ridiculous, but exposure to the elements does wonders.”

Tennis in particular has another benefit beyond the neurotransmitters firing in the brain: It fulfils our fundamental need to socialise.

“Connection is a key pillar of our well-being,” Robertson says. “As human beings, we’re social animals. And our relationships and the connections with other people matter to us.”

Tennis provides the perfect opportunity for interaction because, as Robertson points out, you don’t play it by alone.

“Whether it’s a good friend or somebody you meet at the courts, you need someone to play the game with. And you can play it forever, that’s the beauty of it.”

The social benefits of tennis for mental health have been witnessed first-hand by Tennis Australia’s Coach Development Coordinator for Victoria and Tasmania, Deanna Penman, who experienced it on a personal level, too.

“I suffered from anxiety and depression and my outlet for getting through that was Cardio Tennis,” Penman says. “You can switch off, you can be there with friends, there’s music in the background, you’re outside, you’re whacking balls and it’s in a nonthreatening environment, which is what I love.”

The fast-paced, music-filled fitness class is suitable for all abilities: It’s safe because the balls typically used in a class are low compression. As a result, they move through the air a lot slower and don’t have the same impact as a full compression tennis ball — great if you’re returning from a shoulder or elbow injury.

Penman has also spent time as a Cardio Tennis coach, where she witnessed transformations in her clients.

“Their confidence increased,” Penman explains. “Like, they came in with head down, shoulders down, then a term in — or even just four lessons in — they had their shoulders back, having a laugh, meeting people they’d never met before, going to coffees with them after the class.”

“It grew their social network within their own community, but also their confidence as well,” she adds. “It made them realise that you don’t have to be good at tennis to play and enjoy the sport.”

What to get your tennis hit? Visit play.tennis.com.au for more information.