On International Day for People with Disability, Australia's top young wheelchair players reflect on victory for Australia at the 2019 World Team Cup and encourage others to take to the court. 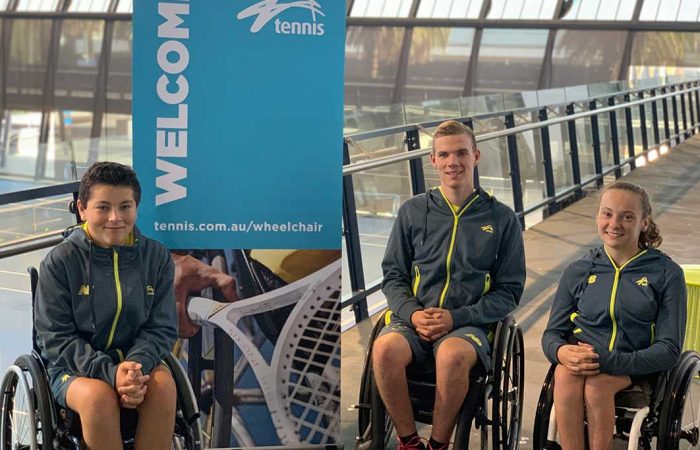 Many players will tell you it’s the journey to elite tennis achievements, and not necessarily the victories, that provide the biggest rewards in the sport.

Some of Australia’s most promising junior wheelchair players managed to combine both when they travelled to Tel Aviv, Israel, and claimed the World Team Cup in 2019.

A year-and-a-half on from defeating Great Britain in the final to achieve that milestone, the Australian trio of Finn Broadbent, Riley Dumsday and Hayley Slocombe are still supporting each other’s progress.

“I hit with Riley twice every week. It’s been really good to cement our friendship,” says the Melbourne-based Broadbent, who related that the memories of the Australian team’s triumph in Israel also helped the players navigate a difficult year.

“We’ve still kind of pushed ourselves along. During the lockdown, we were pushing ourselves, setting goals – three kilometres, five kilometres. We were trying to see who was the quickest.

“It gave you something to strive for, so when we got back on court it was just hitting the ground running.”

“We have a WhatsApp group. All through the COVID lockdown it was like you were still training,” she explains.

“We could keep up our fitness and conditioning and just send in updates in a group chat. It was really nice and really kept you motivated.”

Equally motivating are the memories of Australia’s victory, Slocombe describing the “exhilarating” experience of watching Broadbent and Dumsday defeat Great Britain in the deciding doubles match.

“I don’t know how to describe it. It was just so uplifting,” she says.

With the players now returned to the court – Broadbent and Dumsday train at the National Tennis Centre in Melbourne, while Slocombe mostly does so at Sydney Olympic Park – the young Australians have a fine-tuned appreciation of the many experiences made possible through their sport.

After their victory in Tel Aviv, the team enjoyed a day trip to Jerusalem. “Just to get a hint of all the different cultures is incredible,” says Slocombe, with Broadbent noting that “we couldn’t have picked a better place to play.”

They also couldn’t have picked a better team, with each player making a special mention of the National Development Squad coach Greg Crump, who guided them in Israel and has long been an influence on Australian wheelchair tennis.

“He’s had a massive impact on all of us,” says Broadbent. “I’ve probably been playing six years and just first starting off with him he makes you feel at home. Like you want to go to the court every day … he’s an awesome bloke to be around.”

So too are other accessible role models. Broadbent was inspired to take up the sport after watching Dylan Alcott and Heath Davidson compete at the Australian Open.

He’s delighted that the major-winning Australians remain so keen to support others in the sport.

“They’ve been a big influence on me, and the juniors,” says the Victorian, sharing a recent experience of training with Alcott and Davidson at Melbourne Park.

“They all chatted to us and just gave us pointers here and there. Even throughout my five or six-year journey, whenever I’ve seen them, they’ve had smiles on their faces, just wanting to have a chat, make you feel welcome. You couldn’t ask for anything more.”

Slocombe not only agrees, but also appreciates the flow-on effects of inspiring others to take up the sport.

Participation brings many rewards. Broadbent, also a keen golfer who plays off a handicap of 18 and has twice managed elusive hole-in-ones, encourages others to simply be part of sport.

“Even if you’re not going to be a superstar, which you don’t have to be. Just go out and have fun. That was my goal at the start.”

With both Broadbent and Slocombe now studying at university, there are also many life lessons to take from the sport.

“I’d say that having a positive mindset is really helpful in all areas of life,” Slocombe relates.

“You might miss a shot, but don’t beat yourself up about it. Because it will affect you further on … you just move on and learn from it. Growing from it is applicable in all areas of life.”

The lifelong friendships that can be formed through tennis are perhaps the biggest rewards of all.

“I would say it’s the connections you make,” says Broadbent, when asked to name the one thing he most loves about tennis.

“Yes, I’ve travelled overseas a bit, but all the friendships you make within Australia and with all the other tennis players is the best thing.”