In our Flashback Friday series, we look back at Casey Dellacqua’s memorable Australian Open fourth-round run in 2008. 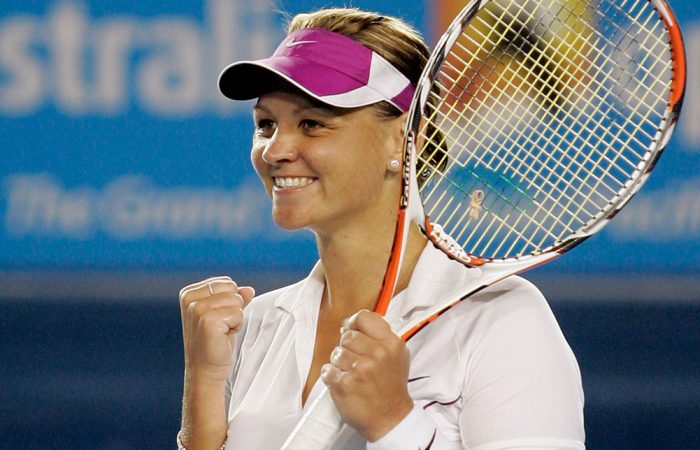 After five consecutive first-round exits at Melbourne Park, the world No.78-ranked Dellacqua scored her first win against Karin Knapp. She won the deciding set 8-6 against the world No.50-ranked Italian.

“To get the monkey off my back is a huge hurdle for me,” said a 22-year-old Dellacqua.

Dellacqua’s winning run continued, scoring a career-first top-20 win against world No.15 Patty Schnyder in the second round.

She then upset former world No.1 and Australian Open 2006 champion Amelie Mauresmo in the third round, much to the delight of a vocal Rod Laver Arena crowd.

“I could feel the whole crowd. I could feel Rod Laver almost like vibrating because the crowd was so loud. It was just awesome,” Dellacqua recalled.

These performances catapulted the unheralded Dellacqua into the spotlight.

“It’s quite surreal, but, yeah, it’s fantastic,” Dellacqua said after seeing her photo on the front page of Australia’s biggest newspapers.

Dellacqua’s Nan, who cried tears of joy from her player’s box and proudly wore an Australian flag headpiece throughout the tournament, also got plenty of attention.

“I spoke to my Nan, and she was like a little bit, ‘Oh, I don’t like this’,” Dellacqua told media at the time. “She’s not really used to anything like this before. We’re just a family from Perth.”

Dellacqua’s down-to-earth qualities resonated with Australian fans. She shared her love of cars and shopping at Target, which led to the department store becoming a sponsor.

“My favourite shop has always been Target,” Dellacqua told media during her winning run. “I like their tank tops. They’re comfy to practice in and usually you can get deals for like three for 30 bucks or something.”

Dellacqua left the tournament at a career-high of No.57 and as the new top-ranked Australian woman.

The life-changing run remains one of her favourite tennis memories.

“It was so unexpected, that maybe I wasn’t even ready for it,” Dellacqua later shared with AthletesVoice.

“I was so young, physically and mentally, and unaware of a lot of things. But I’m grateful for that experience, because it was the first tournament that gave me the confidence and belief in myself that I could be a really good player.”