Australians Alex de Minaur and Jordan Thompson are into the third round at the Paris Masters. 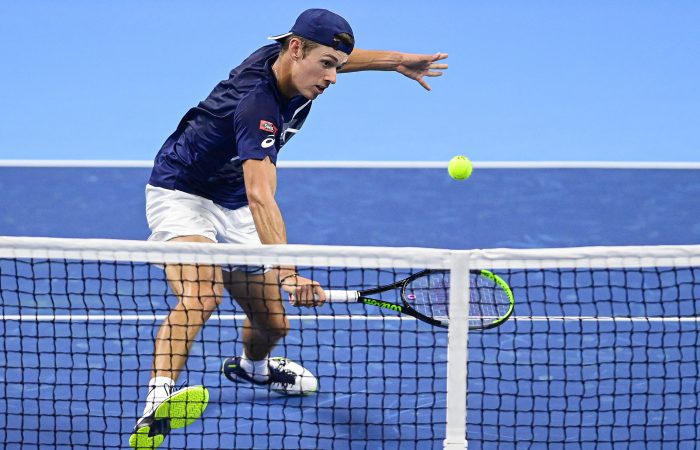 Alex de Minaur and Jordan Thompson have both recorded outstanding victories at an ATP Masters 1000 tournament in Paris.

The 16th-seeded De Minaur overcame Italian Lorenzo Sonego 6-3 7-5 in the second round.

The No.32-ranked Italian had defeated world No.1 Novak Djokovic during a finals-run in Vienna last week. But De Minaur dominated their 87-minute match, losing only 10 points on serve and did not face a break point.

The No.25-ranked Australian now plays third-seeded Russian Daniil Medvedev in the third round.

Halloween might be over, but one demon is still roaming 😈@alexdeminaur claims victory over Lorenzo Sonego 6-3, 7-5. He faces Medvedev in R16.#RolexParisMasters pic.twitter.com/SPyQGs54Qo

Thompson moved into the third round too, recording a 2-6 6-4 6-2 victory against Croatian Borna Coric.

It is Thompson’s first victory against the No.24-ranked Coric, who had beaten him in the US Open fourth round earlier this season.

It also marks a third career top-30 win at ATP Masters 1000 level for the No.61-ranked Thompson and sets up a third-round showdown with top seed Rafael Nadal.

It will be Thompson’s first career-meeting against the 20-time Grand Slam champion, who recorded his 1000th career win today.

Australian duo Max Purcell and Luke Saville lost in the first round of the doubles draw, hurting their chances of qualifying for the season-ending ATP Finals.

John Peers and his New Zealand partner Michael Venus have a chance to secure their ATP Finals spot this week in Paris. The seventh-seeded team play American Austin Krajicek and Croatian Franko Skugor, who defeated Purcell and Saville, in the second round.