Today is World Mental Health Day, which aims to raise awareness of the importance of supporting mental health. 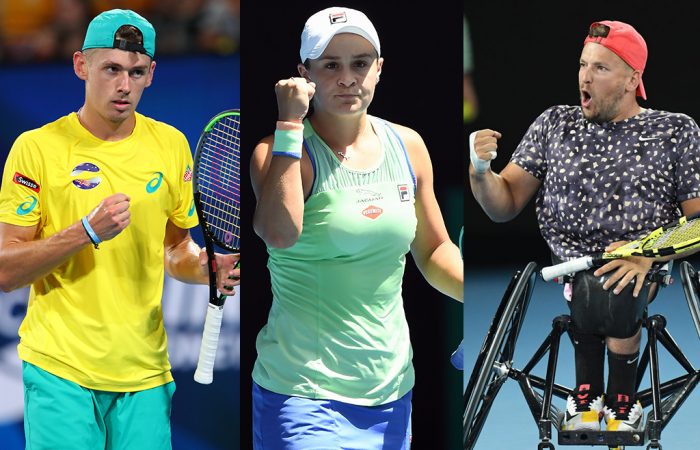 Australia’s top-ranked players are role models both on and off court, especially with their approach to prioritise mental health.

Ash Barty’s tight-knit team includes mentor Ben Crowe, who has played an important role in her rise to world No.1.

“Ben has become a massive part of my team,” Barty noted. “Helping me with my mental application, and changing my perspective of things in both life and in sport.”

According to Crowe, Barty’s mental health journey has been about building greater self-identity.

“She’s found her authenticity and has a beautiful perspective on herself away from the tennis court,” Crowe told 3AW earlier this year.

“She knows that playing tennis is what she does, but it’s not who she is.”

Crowe explained embracing imperfection was another turning point for Barty.

“Athletes get caught up in perfection myths – feeling like they’re not good enough, not strong enough, not fit enough,” he said.

“Ash has taken off that armour and just let herself be seen: real, raw, imperfect, vulnerable Ash Barty. From that authenticity she gives herself permission to make mistakes and fall down, but get up again and learn from that.”

World No.1 Dylan Alcott credits Crowe for helping his career too.

Alcott admits his US Open final loss in 2019, which denied him a calendar-year Grand Slam in the quad wheelchair division, taught him a valuable lesson about the importance of maintaining mental health.

“When I needed it, it wasn’t there because I hadn’t practised it,” he explained. “You have to practise your mindset every day. It was a real wake-up call.”

After that experience, Crowe helped Alcott gain a fresh perspective on court.

“I used to have an expectation to win. I have a goal to win. Now my expectation is to just be the best version of Dylan,” Alcott explained after claiming a sixth consecutive Australian Open title in January.

Alex de Minaur also understands that both physical and mental preparation is required to achieve his best.

“The amount of things you have to do to prepare for matches is unbelievable, even when you are in the right head space,” the 21-year-old shared with Behind the Racquet.

The world No.28 works closely with a sports psychologist to ensure he is always match ready.

“I now talk to him almost every day on the phone,” De Minaur said. “I have a tendency to have high expectations for myself and if I don’t achieve it, that’s when I get pissed off at myself. He tries to bring out a level of calmness and enjoyment, which is when I play my best tennis.

“For me, it has been about dealing with my problems upfront. I’ve tried to bottle up many different emotions. I couldn’t handle it anymore. The best thing that has happened to me was seeing a psychologist.”

Such approaches serve as an important reminder that there is no shame is seeking help. In fact, being proactive to look after your mental health delivers many rewards.

Happy World Mental Health Day to all in our tennis community.

> Playing tennis offers both physical and mental benefits, so why not hire a court today. The court is calling!