A successful professional player of her era, Daphne Fancutt is also being fondly remembered for the passion she instilled in other players and as the matriarch of a renowned Australian tennis family. 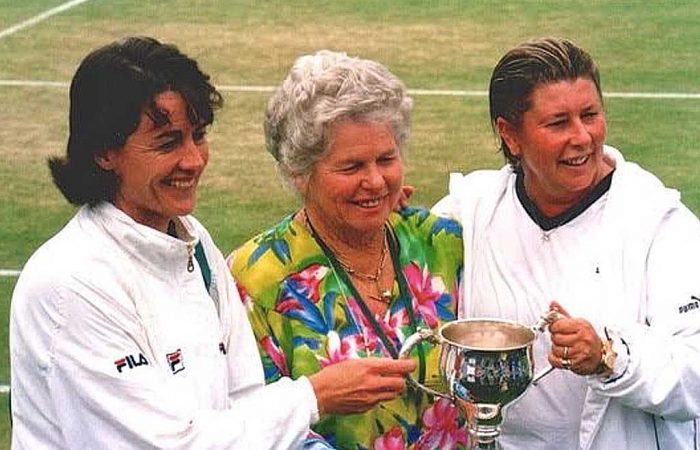 Boasting an appearance in the 1956 Wimbledon ladies’ doubles final among her many achievements, Daphne Fancutt was a highly successful professional player of her time.

But it was the passion that she instilled in generations of players that followed for which Fancutt will arguably be best remembered. The Australian tennis community is mourning the loss of a beloved member after Daphne’s death at the age of 87.

Born at Monto in rural Queensland, a young Daphne Seeney almost certainly developed both work ethic and resilience as she completed the many outdoor chores were required on her family’s cattle station.

It was tennis, though, that captured Daphne’s imagination and by the age of 10, she’d declared her desire to compete at Wimbledon. Her father was said to be dubious but built a makeshift tennis court on the property, along with a playing wall for Daphne to practice on.

Fancutt later spoke of the skills and fearlessness she also developed playing fixtures and local tournaments with male players, as well as many hours training with her brothers.

A lefthander with a damaging backhand, the determined young player realised her Wimbledon dream as the 1956 doubles finalists with Fay Muller. Runners-up to Angela Buxton and Althea Gibson, the Queenslanders were rewarded with 20 pounds in vouchers to be redeemed at a shop in London.

There were also personal highs for Daphne, who met the South African-born Trevor Fancutt when he was tasked with looking after the young Australian by their mutual sponsor, Dunlop.

The pair formed a successful doubles partnership but there were professional challenges after their 1957 wedding. “It was lovely having Trevor of course, but when we got married then the trouble started because he was in a team and there was a ban on wives,” Daphne related in 2007. “So we got married one day and he had to play Spain in Davis Cup the next morning.

Still, their shared experiences formed a solid foundation for one of Australia’s most remarkable tennis dynasties. Settling in Brisbane, Daphne and Trevor later became parents to sons Michael, Charlie and Chris, who all competed as professionals.

The famous family is believed to be the only one in the world that has had all its members compete in the main draw of Wimbledon. Tom Fancutt, one of Daphne’s five grandchildren, has followed in father Chris’s professional footsteps and is coached by his uncle, Charlie.

The energy that fuelled Daphne’s professional career was later channelled into the Fancutt Tennis Centre in Lutwyche, where Wendy Turnbull was among those who developed into notable players.

The former world No.3, who reached three Grand Slam singles finals and won nine Grand Slam doubles titles, recently related to the WTA that Daphne was her biggest source of inspiration.

“Her coaching style was about working with what you had to maximise your strengths,” said Turnbull. “She treated everyone as an individual and focused on their own personal game.

“And Daphne definitely had the gift of the gab, so you were always listening to what she was saying.”

The power to inspire came easily to Daphne, whose passion for tennis endured throughout her lifetime. She once estimated that during the 50 plus years of operating the Fancutt Tennis Centre, she and Trevor had coached more than 60,000 pupils.

“We have a great love and passion for the game and have never lost it,” she enthused in 2007.

“A lot of players seem to go away from the sport and go into something else, but we’ve always tried to put a lot back into the sport. I think that’s when you get more joy out of it. The more you give back, the more you really realise how many people make up the game”.

As Daphne’s leaves her remarkable mark on Australian tennis, there are countless members of the community who’ll be thankful for that sentiment.