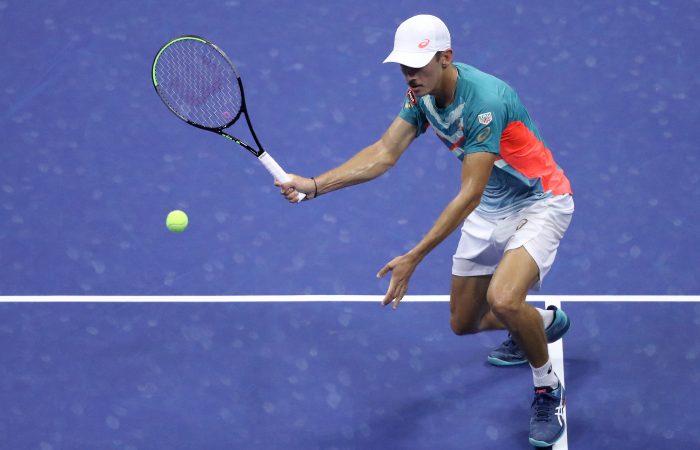 Alex de Minaur’s career-best run at the US Open has ended in the quarterfinals.

“He played well. I didn’t get chances,” De Minaur conceded.

“I would have loved to put more of a fight. He played at a very high level, and I wasn’t able to lift mine up to meet his. Still got lots of, lots of things to work on. I guess that’s an upside.”

The No.3-ranked Thiem stamped his authority on the match early. He fired 11 winners to De Minaur’s two in the opening set, using his firepower to dictate points.

De Minaur, who was attempting to become the first Australian man in 15 years to advance to a Grand Slam singles semifinal, did not hold serve in the opening set. Despite landing 71 per cent of his first serves, he won just nine points across his three service games.

Thiem’s relentless attack had De Minaur on the back foot – and 11 unforced errors did not help the Australian’s efforts to subdue the No.2 seed.

The 21-year-old De Minaur stuck with Thiem early in the second set. His regained control on his service games and more net approaches was proving an effective tactic.

But showing the class that has helped him reach three major finals, Thiem reeled off five consecutive games to take a two-sets-to-love lead.

Thiem had too many answers, breaking De Minaur’s serve again to open the third set.

The world No.28-ranked Australian continued to fight, breaking back in the sixth game. He then recovered from 0-40 on his next service game to edge ahead 4-3.

“I just lifted my intensity a bit more. I started to go for it a bit more,” De Minaur said.

Thiem maintained his composure though, breaking in the ninth game and then serving out victory after two hours and five minutes on court.

“It’s a step, a learning curve. I’ll learn from this like I’ve been doing my whole career,” the Australian said.

“I wish I could just all of a sudden flick the switch and start winning Slams. It’s a slow process. I’ll keep learning and I’ll keep improving. That’s the only way to keep moving forward.”

He begins his US Open campaign tomorrow, with the two-time champion facing world No.4 Sam Schroder from the Netherlands in his first round-robin match.