In our Flashback Friday series, we look back at Lleyton Hewitt’s US Open victory in 2001. 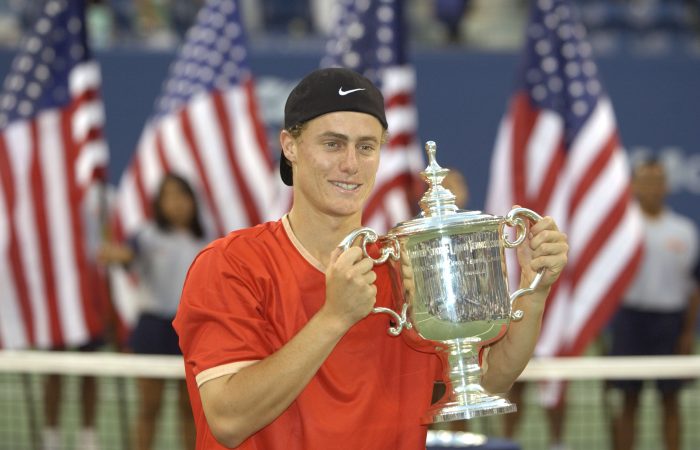 Lleyton Hewitt made his first Grand Slam singles final at the US Open in 2001.

The 20-year-old, who was the fourth seed, survived a five-set battle against Andy Roddick in the quarterfinals then lost only four games against seventh seed Yevgeny Kafelnikov in the semifinals.

It set up a final showdown against 13-time Grand Slam champion Pete Sampras.

“Walking out there to play Pete Sampras in your first-ever Grand Slam final, it’s something that you’ll never forget. That’s for sure,” Hewitt recalled.

Sampras was in impressive form too, having held 87 consecutive service games (stretching back to the second round) to progress to his seventh final in New York.

Hewitt, however, refused to be overawed.

“I didn’t want to let the chance sort of slip by, that’s for sure. I was definitely up for the match,” Hewitt said.

“I felt I’d been getting better and better each match that I played. I definitely gave myself a big chance.”

“He told me go out there and enjoy myself,” Hewitt said.

Hewitt showed no sign of early nerves, breaking Sampras’ serve in the opening game. Although he could not consolidate the break, Hewitt stuck with the American champion in windy conditions.

“It’s one of the toughest condition days that I’ve had to play in and had to deal with,” Hewitt recalled.

Some incredible passing shots helped Hewitt take the opening set in a tiebreak. From there, he took control of the match to record a 7-6(4) 6-1 6-1 victory in one hour and 53 minutes.

“I even had to look up at the scoreboard a couple of times just to check what the score was,” said Hewitt, who hit 36 winners and only 13 unforced errors in the final.

“It really hadn’t sunk in that I was that far ahead. I was still taking it one point at a time, one game at a time.”

Hewitt broke Sampras’ serve for the sixth time to win the match, securing the title with a backhand passing winner and falling on his back in celebration.

“If there’s ever anyone that you’d want to play in a Grand Slam final, if you were going to win, it was one of the greatest players ever to live,” Hewitt said.

“To see the guys who have held up this trophy, to now have my name under those guys, it’s an unbelievable feeling. It’s something words can’t describe.”

READ: De Minaur joins Thompson in US Open third round