US Open, day one: Six Aussies in action

Six Australians feature on the US Open's day one schedule. 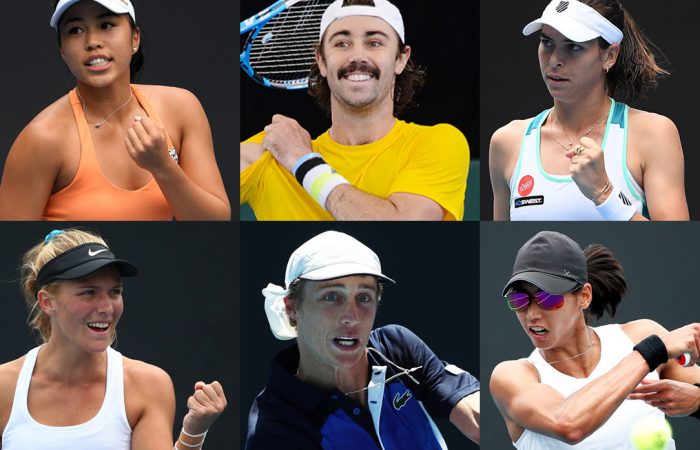 The US Open begins tonight, with six Australians featuring in first round singles action.

It is the first Grand Slam tournament played since the COVID-19 pandemic shutdown professional tennis earlier this year and for our Aussie players, an exciting chance to make their Grand Slam return.

Aussies in action, day one:

Ajla Tomljanovic (AUS) v [17] Angelique Kerber (GER)
Women’s singles, first round, Louis Armstrong Stadium, first match (starts 1am AEST)
The No.59-ranked Ajla Tomljanovic opens play at Louis Armstrong Stadium against three-time Grand Slam champion and former world No.1 Angelique Kerber. The 27-year-old Tomljanovic is making her seventh main draw appearance at the US Open, where she has made the second round on four occasions. The No.23-ranked Kerber, who won the US Open in 2016, has not played since the tour’s return. “The way tennis is these days you see players beating each other no matter the ranking, and especially with this with this big time off,” Tomljanovic says of her chances. “The important thing is that I’m feeling good and I like the way I’m hitting the ball.”

Jordan Thompson (AUS) v Stefano Travaglia (ITA)
Men’s singles, first round, Court 6, first match (starts 1am AEST)
In his fifth consecutive main draw appearance in New York, Jordan Thompson faces No.87-ranked Stefano Travaglia in the opening round. This is their first career meeting. While the 26-year-old Thompson made the final qualifying round in his tour return last week, his 28-year-old opponent has not played a professional match since March. The No.63-ranked Thompson is seeking to reach the US Open second round for a third time.

Lizette Cabrera (AUS) v Danka Kovinic (MNE)
Women’s singles, first round, Court 15, second match
The No.127-ranked Lizette Cabrera is the only Australian woman not to draw a seeded opponent in the first round. The 22-year-old from Townsville, who is contesting the US Open main draw for a second time and looking for her first career Grand Slam win, faces world No.92 Danka Kovinic. This is her first match against the 25-year-old from Montenegro. Cabrera prepared for the tournament at the UTR Pro Tennis Series in Brisbane, where she claimed two titles.

Maddison Inglis (AUS) v [24] Magda Linette (POL)
Women’s singles, first round, Court 4, third match
In her US Open main draw debut, No.119-ranked Maddison Inglis is also aiming to achieve another career milestone. The 22-year-old from Perth needs to score a career-first win over a top 50-ranked opponent to advance in New York. She meets world No.37 Magda Linette in the opening round, a 28-year-old from Poland who is making her sixth US Open appearance. Inglis brings good form into the tournament, having won two UTR Pro Tennis Series titles in Brisbane in recent weeks.

Marc Polmans (AUS) v Marcos Giron (USA)
Men’s singles, first round, Court 7, fourth match
Contesting the US Open main draw for a first time, Marc Polmans faces American Marcos Giron in the opening round. This is their first career meeting. The 23-year-old from Melbourne, who is ranked No.121, made the Australian Open second round earlier this year. His 28-year-old opponent, who is at a career-high ranking of No.96, is yet to win a Grand Slam main draw match in four previous attempts.

Astra Sharma (AUS) v [19] Dayana Yastremska (UKR)
Women’s singles, first round, Court 8, fourth match
A comprehensive win against world No.75 Taylor Townsend last week highlighted Astra Sharma’s hard work during the tour break – but the world No.126 faces an even tougher challenge in the US Open first round. The 24-year-old from Perth, who is making her second US Open main draw appearance, plays 21-year-old Dayana Yastremska – a big-hitting Ukrainian ranked No.25. It is their first career meeting.

> Check out the full US Open day one schedule