Getting to know: Rinky Hijikata

Find out more about Rinky Hijikata, one of Australia's most promising teenage players. 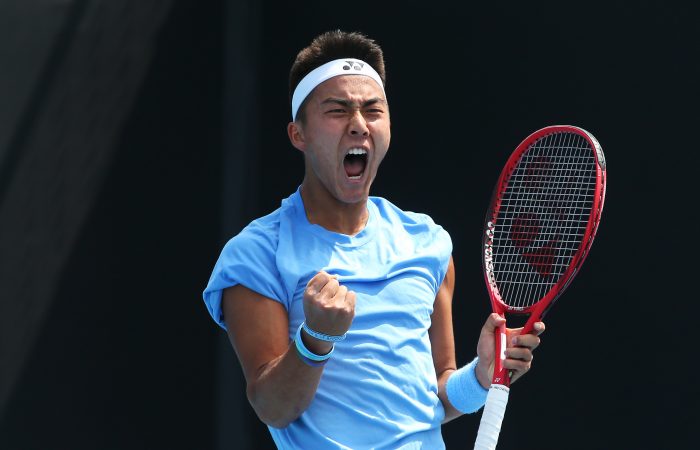 Rinky Hijikata was named the Male Junior Athlete of the Year at the 2019 Australian Tennis Awards and earlier this year scored his first Grand Slam-level win to reach the second round of Australian Open qualifying. He is currently contesting the UTR Pro Tennis Series in Sydney, where he won his first title last week. The promising 19-year-old from New South Wales, who studies and plays college tennis at the University of North Carolina, caught up with tennis.com.au to reflect on his tennis journey so far …

I was probably three or four when I started playing tennis. My dad is a tennis coach and my older brother and sister used to play. I’d go whenever they practiced and pick up the balls, then while they were having their drink breaks I’d hit a few balls around. I started hitting against the garage at home. I always had a racquet in my hand and loved it.

My favourite player growing up was Lleyton Hewitt, then later on it was Kei Nishikori.

My dad was the one who first got me into tennis, so he’s had a massive influence on me loving the sport. I’ve had a lot of coaches at the National Academy in Sydney who have taught me different things and given me different perspectives on the game. I’ve learnt a lot from all of them.

Winning a silver medal at the Youth Olympics in doubles (in 2018) because I was playing for something bigger than myself. I don’t take it for granted anytime I get to play for Australia or my state, when you play for something bigger I just think it means a little bit more. Also winning in the first round of qualifying at this year’s Australian Open because a lot of hard work has gone into that as well.

What is the best advice you have received?

John Millman spoke to us when we were part of the Australian Junior Davis Cup squad and I remember him saying ‘half the battle is believing that you belong at a certain level. Once you believe you can play at that level, it becomes easier’. I think that’s been really true for myself and I’ve seen that with other guys too. Once you have that belief, it makes it a lot easier to get wins at that level. Half the battle is mental, so that piece of advice really helped.

“Some days you can sort of go through the motions and don’t really realise how lucky you are to do what you do."

With his first year of US college cut short, Rinky Hijikata is gaining valuable perspective at home. https://t.co/h5EneZEUjr

How challenging has it been managing study with your tennis development?

It’s been a little bit tough, especially at college trying to schedule tournaments and practice around class commitments and exams. But I think it has helped me grow as a person, it’s forced me to be more organised.

What advice would you share with young players wanting to pursue a professional career?

I think the main thing, especially as a young player, is just to enjoy it as much as you can and not focus too much on results. I know when I was younger I would get caught up on losses for quite a while, I’d take losing pretty hard. Obviously those losses are tough learning curves, but at the end of the day they don’t mean as much to me now. If I had of known that at the time I would have relaxed a bit more and enjoyed myself more, which probably would have made me play better as well.

I’m pretty competitive in anything I do and I love any kind of sport. I’m really into rugby, so maybe I could have been a scrum half.

If something works well on the first day of a tournament, then I’ll try to keep doing it throughout that week. So if I warm-up at a set time and win, then I’ll warm-up at the same time again the next day with the same person and try to keep the same routine.

Nick Kyrgios’ serve. His serve is just ridiculous, it’s pretty untouchable. When he’s on, he doesn’t lose many points on serve.

I’d like to play with either Rod Laver or Roger Federer.

Tennis takes you many different places, what has been the most memorable place you’ve played at?

How would your family and friends describe you?

What are your long-term goals?

I’d love to play Davis Cup one day and also represent Australia in the Olympics, and hopefully be able to win something in either of those two competitions. I’d like to win a Grand Slam as well.