Lizette Cabrera claims a first title in her third UTR Pro Tennis Series final in Brisbane, while the big-hitting Alexander Crnokrak takes out the men's final. 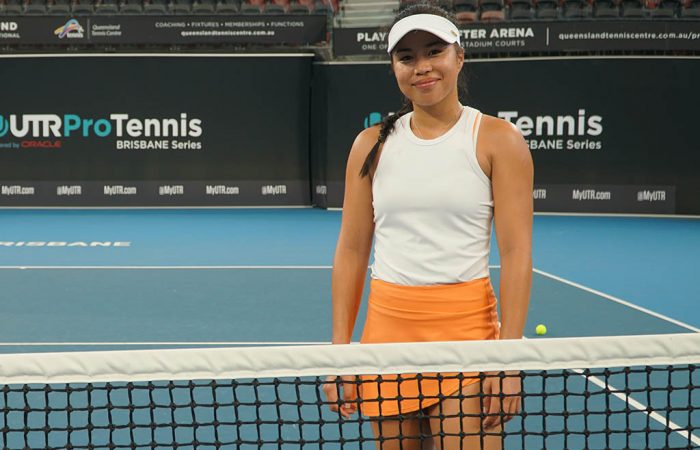 The third time was a charm for Lizette Cabrera at the UTR Pro Tennis Series in Brisbane, with the Queenslander defeating Charlotte Kempenaers-Pocz 4-6 6-1 10-6 today to win the third final in the series.

Cabrera’s victory followed losses in two previous finals, when Maddison Inglis was the winner on each occasion.

“I’m super happy with the win,” the 22-year-old Cabrera told tennis.com.au after overcoming a determined Kempenaers-Pocz at Pat Rafter Arena.

“It was nice to finally win this week after losing in two finals. It feels really good.”

There was perhaps particular satisfaction in finding a way to counter Kempenaers-Pocz’ impressive aggression. Still just 15 years old, the South Australian showed a maturity beyond her years as she claimed the first three games of the match and held on to win the first set against the vastly more experienced Cabrera.

Taking two hours and two minutes to eventually secure her hard-fought victory in the match tiebreak, Cabrera was justifiably satisfied with her problem-solving ability.

“I think I handled myself really well,” reasoned the Queenslander. “I had a few missed opportunities in the first set, but I thought I bounced back well in the second.

“I thought I played aggressive when I needed to and kind of handled Charlotte’s big serve really well towards the end.”

After opening her third UTR Pro Tennis Series campaign with a round-robin win against Olivia Gadecki, there was also a confidence-boosting win over Inglis. Cabrera held a match point against the eventual winner in the first final and suffered a straight-sets loss in the second final last week.

“I think Maddi’s playing awesome. We’re such good friends and we train together so it’s always hard playing against each other,” said Cabrera, who claimed a 3-6 6-4 10-5 win in the final round robin match yesterday.

“But at the end of the day I kind of came out with a win in the end and it felt good after losing to her the previous two weeks.”

The pleasing turnaround highlighted the value in returning to competition at the UTR Pro Tennis Series after the international tours were suspended due to coronavirus.

“It’s been really good. I mean nothing beats match play and I think because we’ve been training for so long, it kind of gave me a bit of excitement, something to look forward to,” said Cabrera.

“The organisers and everyone who’s made the tournament possible have done an amazing job, and I’m really grateful they put up these tournaments for us players.”

The competitive experience was especially welcome after Cabrera’s strong start to the 2020 season included a quarterfinal appearance at Hobart, and a peak world No.119 ranking.

While admitting she was initially disappointed with the tour shutdown, Cabrera conceded the opportunity to return home also had some benefits.

“I like to kind of keep going and we were about to be playing Indian Wells and that was my first time there, so I was super excited,” she said.

“But yeah, like I kind of handled it in a positive way. I thought ‘you know what? This is maybe a blessing in disguise to have a break and then go back and make some good gains in other areas that maybe usually would have too much time to work on’ … I think I was quite positive towards the whole situation.”

With an impressive run at the UTR Pro Tennis Series now complete, Cabrera is equally excited about a return to international tournaments. The current plan for the world No.127 is to travel to America and train ahead of the US Open, which is scheduled to start in late August.

While always grateful to compete at the highest level, Cabrera does so now with a deep appreciation of her professional opportunities.

“It definitely gave me a newfound appreciation for tennis and everything that is connected to tennis,” she said of recent months off the tour.

“I’m really happy to be out on court and happy that tournaments are starting again.”

With his brutal groundstrokes becoming more dangerous throughout all three instalments of the Brisbane event, the 20-year-old was arguably at his most devastating in a straight-sets win over two-time UTR Pro Tennis Series finals winner Kubler on Friday.

Banes was unable to halt that momentum, dropping serve in the fourth and eighth games of the 33-minute first set and surrendering the last five games of the match as Crnokrak completed his victory.