Ellen Perez and Max Purcell are settling into some solid form in Sydney, with each recording back-to-back finals wins at the UTR Pro Tennis Series in Sydney. 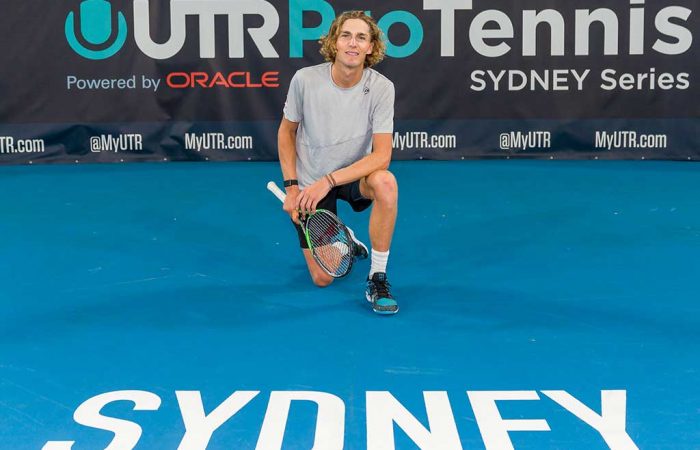 After a second straight win in the final of the UTR Pro Tennis Series event, Ken Rosewall Arena is starting to feel like home for Ellen Perez.

In 2018, the then 21-year-old upset Kristina Mladenovic in the first round of the Sydney International. After defeating Alexandra Bozovic in the inaugural UTR Pro Tennis Series decider last week, Perez replicated that result today for a second straight finals victory.

“It’s definitely nice to get two wins in a row. It’s a really nice court. I’ve got some good memories there,” said Perez with a laugh.

“Maybe centre court in Sydney is my home court. Let’s hope we can keep the win streak there going.”

Taking almost two hours to overcome the determined Bozovic 1-6 7-6(7) 10-7 in today’s final, Perez arguably recorded her most hard-fought victory on the famous arena.

After Perez held serve in the opening game, the 21-year-old Bozovic won five straights to claim the first set in 26 minutes.

“I found myself with my back up against the wall in that match. Every part of me kind of wanted to give up to be honest. I was feeling pretty tired out there,” admitted Perez, who saved two match points as the second set extended to a tiebreak.

“Boz’ got off to a really good start and yeah – after that first set, I knew I had a little bit left in the tank and I was like ‘you know what? Let’s give it a crack’ and I kind of found myself, obviously winning a tight second set.

“From there, I was obviously never going to give it up. It was good to get out of that.”

Fighting back to secure victory in the match tiebreak, Perez is yet to surrender a match in the six she’s contested in two chapters of the UTR domestic series in Sydney – highlighting the value of match play after a long break from the international tours.

“Having a lot of matches (is important). I think I’ve been down in every first set at some point whether it’s by one, two or three games. So to be able to come out of all of them on top, it feels really good,” said the 24-year-old.

“I think each match just taking a little bit of experience from that and I think I’ll be playing the important points really well. When it does come back to close in the match, I’m I feel like I’m executing those (important points) pretty well.”

Max Purcell was equally impressive as he defeated James McCabe 7-5 6-1 for a second straight finals win in the UTR Pro Tennis Series. Last week, the 22-year-old overcame Aleksandar Vukic in the final.

Purcell has dropped just a single match in the eight he’s contested over two instalments of the UTR Pro Tennis Series, doing so in last week’s opener against Kody Pearson.

This week, the Sydneysider recorded straight-sets wins over Benard Nkomba, Cameron Green and Pearson in the round robin stages.

“I think I went about my business pretty well. I was out there to do a job and I didn’t really let anything faze me … I really just tried to get in and out as quick as I could and take the matches on court as seriously as I could,” said Purcell, who also worked hard in practice between matches.

“The first week. I was a little jokingly on court sometimes, trying to chit-chat a little bit too much, taking it a bit more like an exhibition.

“But this time I was like, you know, I’m here to just win these matches and then let’s get better as well in and around them.

“So I took that approach and I think it helped me zone in and focus a bit more, rather than some of the longer matches last week.”

Having spoken about his disciplined approach in the 2020 season, Purcell completed today’s win over McCabe in one hour and 32-minutes.

“James is young and he’s up and coming. He’s a big 17-year-old, so he was out was out there just going as hard as he could from the start and landing a few (shots), but I didn’t really let that faze me too much,” Purcell commented.

“But he’ll definitely get there. He’s got a big game. It’s nice to see some young New South Wales guys stepping up.”

It’s equally rewarding for Purcell to maintain a steely focus in the most difficult circumstances of the international tennis shutdown.

“I’ve been trying to think that I’m doing more than everyone else so anything I can do to be better when we come back,” said Purcell. “I’m trying to use that as motivation.”

In the meantime, there’s an opportunity to claim a third straight UTR Pro Tennis Series victory in Sydney

“It’d be great if I could make it three from three. But if not, that’s fine as well,” said Purcell. “I’m just happy to get matches in.”