While there were few regrets in a Grand Slam-winning career, former world No.1 Pat Rafter admits the 2001 Wimbledon final was a heartbreaking loss. 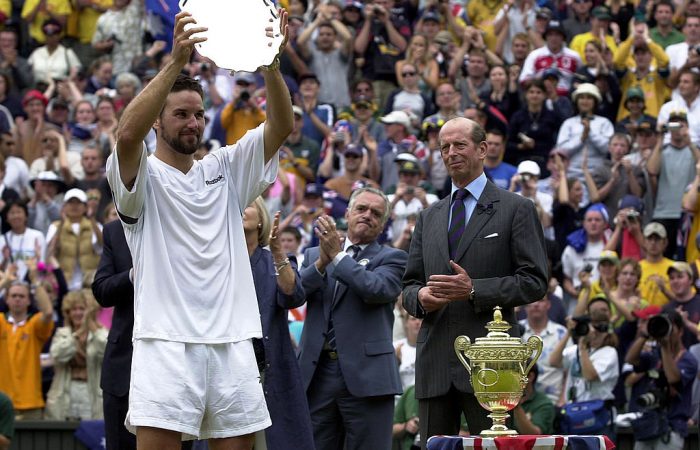 The Wimbledon 2001 final is bittersweet memory for Pat Rafter, who has made peace with his five-set loss to Goran Ivanisevic despite the agony of almost capturing the sport’s most prestigious title.

Ivanisevic was a wildcard ranked No.125 when he beat Rafter 6-3 3-6 6-3 2-6 9-7 in the 2001 decider, an emotional coronation given the Croat had lost all three of his previous three Wimbledon finals.

Speaking with The Tennis Podcast about that unique final 19 years earlier, Rafter indicated he was living without regret.

“It just seemed to be Goran’s – it was just destiny for him. He got me, he was too good,” Rafter said.

“Let’s just say for instance that I’d won that match, and Goran was a basket case (after losing a fourth final) and I was responsible for it at the end of the day?

“The situation is that I’m OK. I’d won a couple of Grand Slams so I’m OK with it, I sort of got my little fix of tennis and I’m doing OK.

“But gee, the selfish part of me wants that Wimbledon trophy. That would have been great to have.”

Rafter, a US Open champion in 1997 and 1998, was appearing in his second straight Wimbledon final, having falling in four sets to Pete Sampras 12 months earlier.

The Australian admitted he had “choked” in that match – he won the first set and led 4-1 in the second set tiebreak – and he entered Wimbledon 2001 knowing that it would be his last, given he was eyeing retirement.

Rafter was then forced to stew when, after his thrilling five-set semifinal defeat of Andre Agassi, rain meant the second semifinal between Ivanisevic and Tim Henman spanned three draining days, culminating on Sunday.

The final was then pushed back to what became “People’s Monday”, where Centre Court opened up to ticket buyers on a first-come, first-served basis.

“It was crazy. The crowd were just yelling for the whole five sets. And I walked out on the court, it was mayhem,” Rafter said.

“I remember winning the toss and electing to serve, and I hadn’t calmed down my nerves. And I lost my opening serve, went on to lose the opening set. So I hadn’t settled well at all.

“I do remember being incredibly nervous, like I’d never been nervous before.”

Yet it was Ivanisevic’s nerves which made the final game iconic.

Serving for a title that had eluded him so long, the wildcard double faulted twice on his first two match points, and saw a third slip away, before finally converting on his fourth.

“I’d just lost my serve (going into the final game) so I was pretty flat to be honest. I was trying to find a way in that last game; Goran was choking. He was just playing the nerves and I was just trying to get balls back,” Rafter recalled.

“I just felt I’d lost a lot of steam after losing my serve, and being so close a couple of games before – I was only two points away from the match actually.

“Every now and then a thought or flashback might come in, and I’m very quick to just push it aside.

“I think for about the first five years (after the final) I was waking up in a cold sweat in the middle of the night, just re-enacting, or going through that game at 5-4 on his serve and just thinking ‘I wish I’d picked this way, or I wish I’d done that’.”

Rafter said that despite his extreme disappointment at losing, he could feel happy for Ivanisevic.

The two were friends and sometimes doubles partners, and remain in contact.

Rafter revealed that prior to Ivanisevic’s 1998 Wimbledon final against Sampras, he rang the Croat’s hotel room, wished him luck, and said he hoped Ivanisevic would win.

“Obviously I wanted to win (in 2001), but if there was ever going to be another winner, it was going to be him,” Rafter said.

“At the time, I’ve got to deal with it, I’m not happy, and when we shook hands, it all looks like we’re best buddies, but it was hurting. I was seething. It wasn’t easy.

“He’s a classic, because it was a pretty moving moment for both of us, and he’ll just sit there (now) and literally give me sh**. It’s unreal. He’ll just say: ‘How’re you feeling? I won that, you know that?’

“And I just sit there and laugh. What am I going to do? I’m either going to cry or I’m going to laugh.”