De Minaur: Kyrgios always has your back 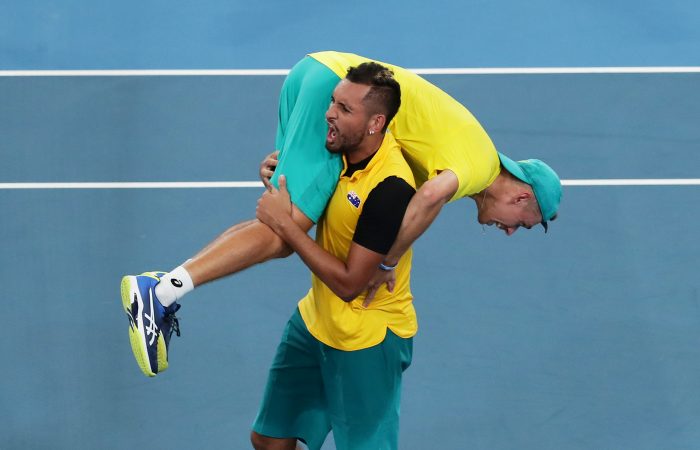 Alex de Minaur has opened up on his friendship with Davis Cup and ATP Cup teammate Nick Kyrgios.

Speaking to Tennis NSW Chief Executive Officer Lawrence Robertson in a Facebook Live from his Spanish base in Alicante last night, De Minaur revealed Kyrgios has had a positive impact on his career.

“We’ve always had a great relationship. Nick’s always done everything in his power to help me out and I’m always grateful for that,” the world No.26 said.

The 21-year-old De Minaur looks up to his 25-year-old teammate, who he first played Davis Cup alongside in 2018.

“As everyone knows, we are not the same person. We’re actually quite different but we complement each other very well,” De Minaur said.

De Minaur also believes Kyrgios does not always get the credit he deserves for being a team player.

“When it comes to team environments, there is no one out there you’d rather have than Nick,” he said.

“He’s always going to have your back at all stages and he’ll do anything for you. It’s the sort of stuff you don’t see because it’s all behind closed doors and in the shadows. You almost wish we could have a camera in the locker room, in the team room, in the bus rides and you’d see how he gets everyone involved.”

De Minaur is hoping they can reunite for the Davis Cup Finals in Madrid later this year. For now, the Australian is simply enjoying being back on court after the easing of strict COVID-19 social distancing regulations in Spain.

“It’s been a pretty crazy period of time. We had two months where we haven’t been able to leave our house,” he said. “Two weeks ago we were finally allowed to go out and hit tennis balls.”