As National Reconciliation Week is marked throughout Australia, Mikayla Zahirovic is not only inspired by her own powerful role models but determined to become one herself. 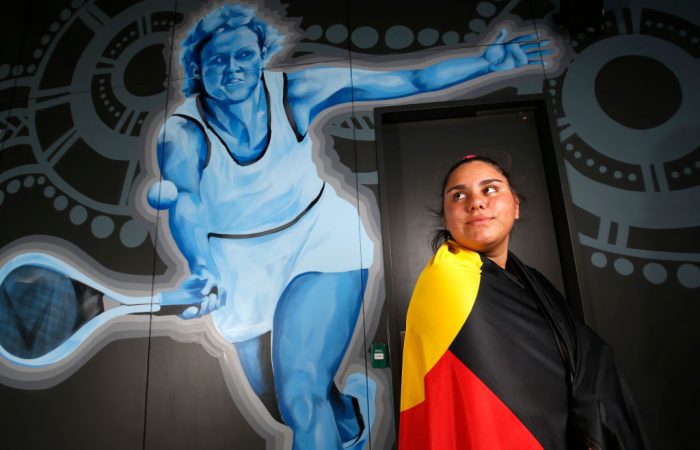 And while nobody else in the family played tennis, there was plenty of encouragement when Mikayla had her first on-court experience as a five-year-old at a local club in the Queensland city.

“I hit my first tennis ball and I was just so excited,” she recalls.

The impact of Evonne Goolagong Cawley and Ash Barty would soon become even more significant in shaping her ambitions in the sport.

“Evonne was a huge idol, especially as we have similar backgrounds,” says Mikayla, who is also of proud Indigenous heritage.

“And then obviously Ash Barty as she was slowly coming up. It was awesome to see her develop into the tennis player she is now. I definitely looked up to them.”

The connection to the past and present world No.1s quickly developed into a life-changing one for the 17-year-old, who keenly relates the privilege of times spent with Goolagong Cawley and Barty. 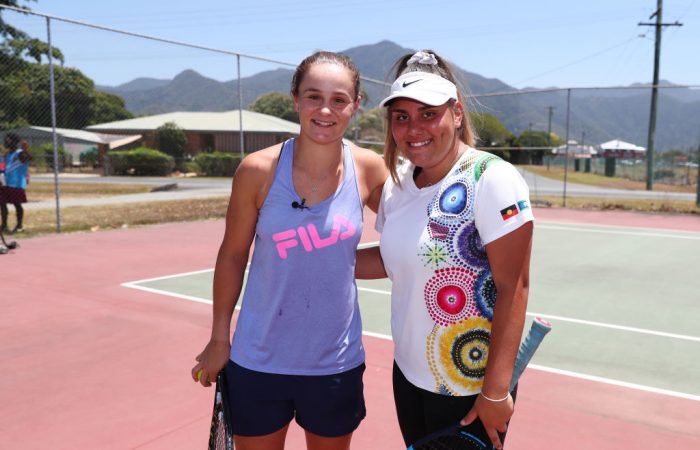 Special memories include a trip to Cairns last year, when Mikayla was alongside Barty and Goolagong Cawley as they surprised a class of indigenous students at ­Bentley Park College.

“Honestly, it’s just really, really nice to just spend time with those two,” Mikayla relates. “And even though people know them for tennis, it’s even better to get to know them on a personal level.

“Both of them are really lovely people, both inside and out. Being able to meet them is like a life dream really.”

“I’ve definitely learned a lot,” she says. “Tennis-wise, I’ve always looked up to their games and I think like I could even say I had some similarities (in style).

“But just the way that they are off the court, that’s where I want to be. I want to be humble and have people looking up to me. Just be an overall good person.”

In many ways, those qualities are already clear.

A winner of the 18/U girls’ championships at the National Indigenous Tennis Carnival for the past two years, Mikayla is also a two-time recipient of the Evonne Goolagong Medal of Excellence, awarded to the player who shows the most leadership both on and off the court.

“I think a bit of everything really,” Mikayla reasons when asked which attributes helped her stand out among almost 200 participants at the Darwin carnival, which is a pivotal part of Tennis Australia’s Indigenous tennis pathway.

“Having the character, just leadership, being good on the court and off the court. It’s helping people out, showing kindness and not getting upset.

“I think I showed a lot of good characteristics and that’s probably why I got picked. A lot of people were the same as me. I’m just grateful that I got the award twice.”

There is equal gratitude in simply attending the carnival, in which participants from each state and territory throughout Australia were represented.

The event is not only focused on tennis but provides a fully culturally immersive experience. In 2019, participants had the opportunity to experience the Djuki Mala workshop and concert, learn basket weaving, jewellery making, painting, sculpting and didgeridoo making.

“It’s such an awesome week,” Mikayla shares. “It’s not really all about tennis, it’s about coming together and learning our cultures and stories all together and sharing everything that we have.”

The 2019 National Indigenous Tennis Carnival has come to a close in Darwin today, with Victoria claiming the Ash Barty Cup and Mikayla Zahirovic taking home the Evonne Goolagong Cawley Medal of Excellence.

“It’s an awesome opportunity to get to know myself better as well,” she adds. “I probably opened up a lot more to a lot of people. They didn’t really know much about me but being at the Carnival, we all got to share all these stories and got to know each other a lot better.

“It’s really good, such a good program and I’m so grateful to be a part of it.”

There’s a particular appreciation of cultural connections as Mikayla reflects on National Reconciliation Week, with its 2020 theme of “We’re in this together” resonating strongly with the Queenslander.

“It’s all about family for me and I just think that it’s important because we’re all in the same boat and it’s good to come together and celebrate.”

While honouring the past, Mikayla also relishes a future in which she can add to her fast-growing role-model credentials. In October last year, she returned to the Mundingburra Primary School in Townsville to celebrate International Day of the Girl with students.

“It means a lot, to be called up. That was the first primary school that I went to so to be able come back and see all the girls, it means a lot,” she recalls.

“I didn’t really know how much of a role model I’d become.”

It’s a position that clearly suits, Mikayla readily sharing advice she would offer to any young player keen to follow in her footsteps.

“Number one would be to stay in school,” she stresses. “And just that if you’re passionate about something and have a dream, then go for it.

“You can do anything if you put your mind to it. If you put hard work and give it a good crack then that’s all you can do really.”

For Mikayla, that means working hard at the Pymble Ladies College in Sydney, where she is completing Year 12 studies on a scholarship courtesy of the Evonne Goolagong Foundation.

At the same time, Mikayla is keenly focused on clear goals in tennis, including a dream to thrive at the Australian Open.

It’s an objective she’s tackling with equal measures of determination and positivity, along with a keen understanding of the many opportunities that can come through tennis.

“I’ve already built so many relationships in the game,” says Mikayla. “The opportunities that I’ve had through tennis have been awesome.

“I’m just grateful and excited for more opportunities to come.”