The 2019 National Indigenous Tennis Carnival has come to a close in Darwin, with 180 participants from around Australian taking part in the event. 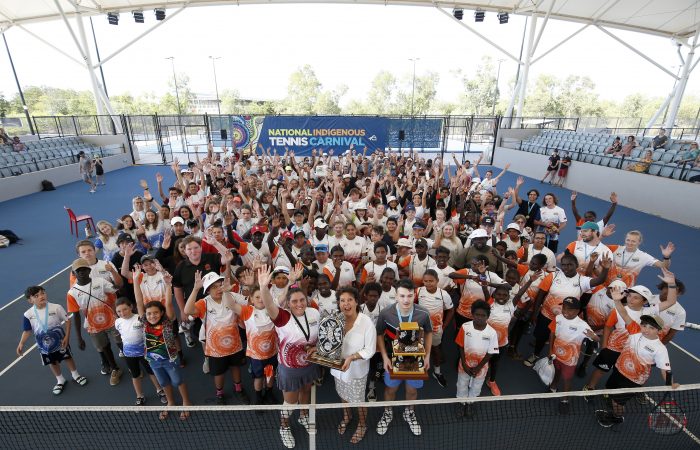 The second-ever National Indigenous Tennis Carnival has come to an end in Darwin today, with Indigenous tennis legend Evonne Goolagong Cawley on hand to present the champions with their trophies.

“This year’s event was a step up on last years. We saw a lot of engagement from the states with Indigenous pathways and programs starting to be built around the country, providing ongoing access to the great opportunities that tennis can bring to the whole of Australia,” Gibson said.

“It is really important for us to bring those programs together annually and continue to provide a pathway for Indigenous tennis players. The National Indigenous Tennis Carnival is a great celebration of culture and tennis and we really look forward to growing the event for many years to come.”

Sixteen-year-old Zahirovic was honoured to have received the Evonne Goolagong Cawley Medal of Excellence for the second time.

“I am speechless to be honest. I didn’t think I was going to get it this year, but to be awarded it again is an amazing feeling and I am feeling truly honoured,” Zahirovic said.

“It was good to see everyone from last year improve. They’ve all improved so much and it was good to play some new people and see new faces.

“It has been a fantastic week at the second National Indigenous Tennis Carnival, the carnival is a great event for Indigenous youth from around the country to come and meet new people, share our culture, have fun and learn more about everything. I think this carnival will go on for a very long time.”

“Ash Barty and Evonne Goolagong Cawley are my two favourite players. They are definitely some of the biggest role models we have in this country, not only for all Australians but Indigenous people.”

After finishing as the runner up in 2018, Victoria’s Toby Radford, won the 18-and-under boys’ championship against Charlie Pade.

“I feel honoured. This is my second year back, last year I was the runner up and pretty disappointed. I wanted to come back firing this year and get the job done, so I am pretty happy with this result,” Radford said.

“Our team wasn’t expecting to win the Ash Barty Cup. It wasn’t a very big team, but obviously we tried hard every match and got our results, which helped us to claim the cup.

“It has been good to catch up with everyone. Just getting to know everyone and learn more about the culture here, it’s been really good.”

Additional information on the 2019 NITC