Two-time Australian champion and far-sighted administrator Ashley Cooper AO, who has passed away at age 83, is being remembered as a giant of the game. 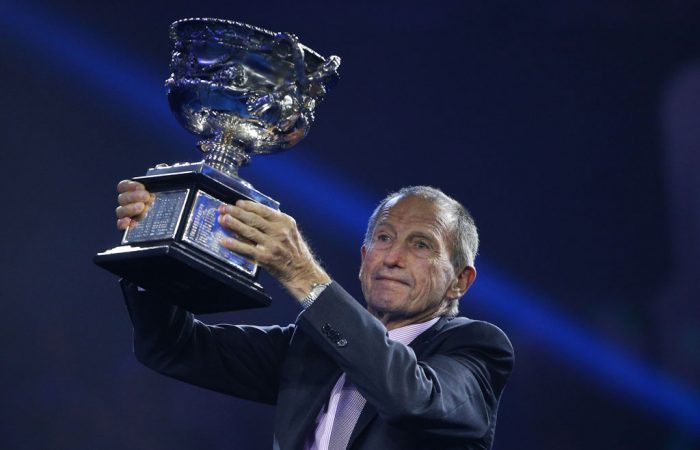 Australian tennis is mourning the passing of Ashley Cooper AO who served the game as a Grand Slam champion and far-sighted administrator.

“Ashley was a giant of the game both as a brilliant player and an astute administrator and he will be greatly missed,” said Tennis Australia CEO Craig Tiley.

“His contribution to the sport went far beyond his exploits on the tennis court. His rich legacy includes the magnificent Queensland Tennis Centre, a project he was passionate about, nurturing the development from the very beginning, and resulting in the return of world-class international tennis to Brisbane.

“Ashley was also the most humble of champions and a great family man. Our hearts go out to his wife Helen and his family, along with his wide and international circle of friends, including so many of our tennis family.

“On a personal note, Ash was instrumental in our family moving to Australia and for that we will be forever grateful. He  was a very humble advisor and great supporter of our transformation of Australian tennis. I will miss him.”

Although born and raised in Victoria, Cooper considered himself a Queenslander and in his role as President of Tennis Queensland he oversaw the creation of the world-class Queensland Tennis Centre, including the jewel in the crown, Pat Rafter Arena in Brisbane.

Cooper played in the golden era of Australian men’s tennis during which he won eight Grand Slam titles including the Australian, Wimbledon and US singles titles in 1958.

He was a right-handed, serve-and volley player who was especially effective against left-handed opponents.

Cooper began playing as a boy in country Victoria tagging along with his parents. When he showed some ability, his father bought a book by Don Budge on how to play tennis and instructed him in the classic form of the game.

In 1953 he was selected (with Roy Emerson) as the junior member of Australia’s overseas touring team overseen by Harry Hopman.

“For six months I practised every day against Hoad, Rosewall, Hartwig, Fraser and Rose so it was pretty tough practice, but you had to get better or get out,” he reflected.

It also built a camaraderie among the players, something illustrated when Cooper and Fraser shared a hotel room in London and ate breakfast together the day that they contested the Wimbledon final.

It was with Fraser that Cooper won three of his four Grand Slam doubles crowns.

In 1957 he led the Davis Cup team that included Mal Anderson and Merv Rose which defeated the United States in the Challenge Round at Kooyong.

His public profile rose even higher when he married Helen Wood, the reigning Miss Australia in 1959. Their wedding attracted more than three thousand spectators some of whom clambered onto the car trying to get a closer look at the golden couple.

During his tenure the old Milton courts were demolished and a new tennis centre built on the site of an abandoned power station.

Throughout his life Cooper was honoured for the roles he played including the Order of Australia, International and Australian Tennis Halls of Fame and Queensland Sports Hall of Fame. A walking bridge giving visitors access to the Queensland Tennis Centre is named in his memory.