Getting to know: Storm Sanders

Find out more about Storm Sanders, a top 100-ranked doubles player who is quickly climbing the singles rankings too. 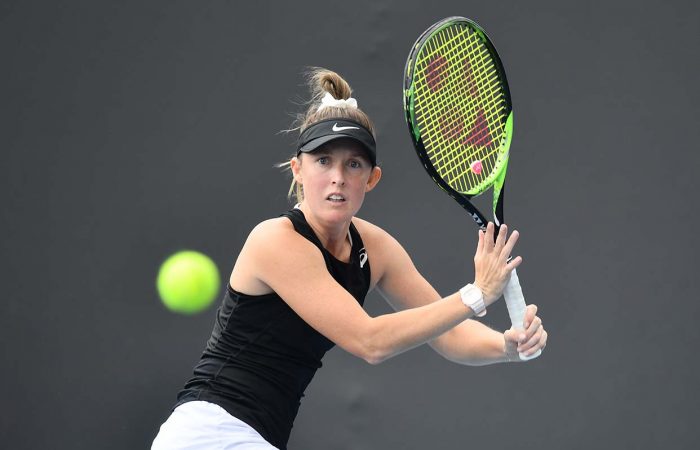 Storm Sanders has enjoyed great success in doubles, winning two WTA titles and achieving a career-high ranking of No.63. The 26-year-old made a singles return in October last year and before the tour was suspended, was charging up the rankings thanks to some impressive form. Sanders caught up with tennis.com.au to reflect on her tennis journey so far …

I was six years old and living in Rockhampton in Queensland. I was watching the Australian Open on TV with my Dad and I told him that I wanted to go play tennis. He took me to a local club and I started lessons there. I’ve loved it ever since and all I have ever wanted to do was be a professional tennis player.

I was watching Andre Agassi when I decided I want to be a tennis player, so he was my first idol. My Dad loved Agassi as well. Alicia Molik and Nicole Pratt were my idols too. I looked up to all the Australian women players. They were my heroes because I wanted to be just like them, to represent my country as a proud Australian and be the best tennis player I can be.

I’d say my parents because they have sacrificed a lot and helped me to get where I am. They are such hard workers and I think I learnt a lot of my underlying values from them.

Being in the Fed Cup team. When I was growing up, I always dreamed about it but maybe never believed that I could. Sam Stosur presented me my jacket when I was on the team the first time. That was definitely my proudest moment.

What advice would you share with young players wanting to pursue a professional career?

Make sure you enjoy all the steps and hard matches. I know it is hard at the time, but just focus on yourself and your journey. Everyone’s journey is different. Also, support everyone else around you. In the end, you’ll need the other Aussie players around you to help you succeed.

Excited about a return to tennis? @stormsanders94 knows that feeling well … https://t.co/lMyiJxKrzO

I would steal Ash Barty’s slice.

I don’t like listening to music, that’s a big one for me. It’s kind of opposite to everyone else.

When I was younger I also wanted to be a sports teacher at a school. I love working with kids and trying to teach people things.

Who has been your toughest opponent and what did you learn from that experience?

Elina Svitolina. I played her earlier this year and it was my first top-10 match-up. I think I put too much pressure on myself to do better, instead of focusing how I can play. I tried to play too well and do too much. At the end of the day it’s just a match of tennis, but I worked it up too much in my mind to make it bigger than it was. She’s an unbelievable player and she made me work for every point that I won. She was so calm and knew exactly what she wanted to do, so I think the lesson for me is to focus on my game, go out there next time with confidence and do what I do best.

Who are your best friends on tour?

Tennis takes you many different places, what has been the most memorable place you’ve played at?

Wimbledon. It is bigger than tennis that place.

How would your family and friends describe you?

Positive, a little crazy and generally a happy-go-lucky person.

Tell us your favourite …

Surface to play on: Hard court