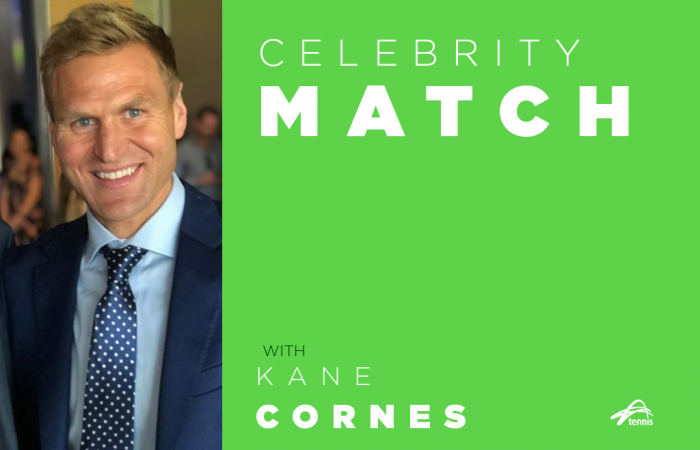 Kane Cornes played 300 games for Port Adelaide in the Australian Football League. A 2004 premiership player, he is also a four-time winner of the club’s John Cahill Medal – a best and fairest award named after the father of former Australian Davis Cup player and now esteemed coach Darren Cahill. Since retiring in 2015, Cornes has become a prominent media personality. He hosts a breakfast radio program in South Australia, is a regular contributor across the SEN radio network and a presenter on the Sunday Footy Show television program on the Nine Network.

In our Celebrity Match series, Cornes reveals he enjoys tennis too and has even met 20-time Grand Slam champion Roger Federer …

I never played competitively, but have loved having a social hit for as long as I can remember and still play regularly to this day.

My best shot is forehand. I’ve never been able to master the one-handed backhand.

Playing against my brother on a friend’s court. He was so competitive and used to throw his racquet at the drop of a hat.

In 2013 we were on a pre-season camp in Dubai. My team-mate Robbie Gray and I got to watch Roger Federer train and speak to him after his session. He was so friendly and generous with his time.

One of the best sights in world sport. It was a great day getting to meet this guy. Thanks @the_kokk1 and @toddlangman for hooking us up. @robbiegray_9

I think it was Lleyton Hewitt’s third-round match at the Australian Open in 2005.

Lleyton Hewitt because he’s South Australian, a similar age to me and absolutely got the most out of his ability.

Andre Agassi because I’ve heard he cooks a great steak and seems like a brilliant person to have a cold beer with.

The best part of the Australian Open is … the buzz and atmosphere that it creates in and around Melbourne.

Tennis is fun because … anyone of any age and ability can have a go.