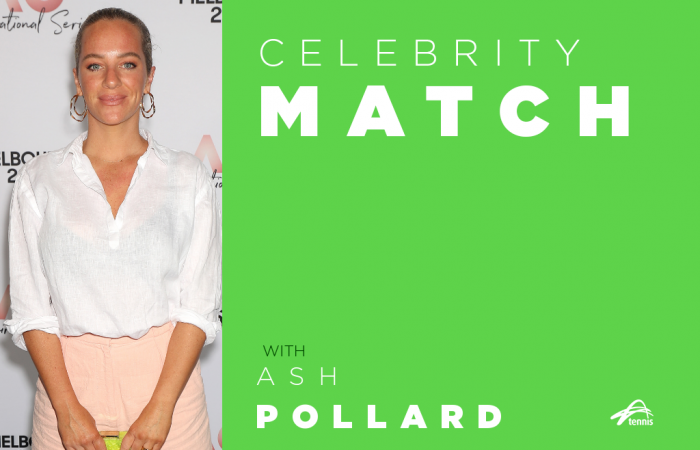 With her vibrant personality, Ash Pollard became a fan favourite as a contestant on My Kitchen Rules in 2015. She has since had her own television cooking show and released a cook book, as well as starring on reality television programs Dancing With The Stars and I’m A Celebrity … Get Me Out of Here! She is currently working in breakfast radio on the Central Coast of New South Wales.

In our Celebrity Match series, the bubbly Pollard reveals she once shared a tennis coach with a Grand Slam champion …

Yes I have played, although I haven’t picked up a racquet in a couple of years. I used to play quite a lot as a kid, weekend fixtures and the like. My coach for a while was Nick Watkins. Perhaps you know him? He also coached Sam Stosur. But no, I never excelled like she did!

My backhand is my best shot. I slice that ball as close to the top of the net as I can.

I remember fondly after my weekend lessons had wrapped, my Dad would take my sister and I to the clubhouse for lunch. My treat was always ham and cheese toastie and chips.

Beating former world No.1 and Australian Open 2000 champion Lindsay Davenport at a rally during a publicity shoot at Melbourne Park. She probably let me win, but for now I’ll claim my bragging rights!

Oh yes! It was at Royal Pines Resort on the Gold Coast. It was a ROASTING hot day, but no-one cared. We watched Venus Williams.

I used to love Maria Sharapova. I used to try and screech like her during games to put my opponents off!

Both the Williams sisters. Serena in particular, I’d love to know how she does it? Consecutive wins, her determination and discipline is something to behold.

The best part of the Australian Open is … the world’s best players converging in the one place and the community vibe. The buzz is addictive and is something I look forward to year in, year out.

Tennis is fun because … because it’s a sport you can play your entire life –  there is never a used-by date!