Currently self-isolating in Brisbane, the world No.43 shares how he is coping during the COVID-19 pandemic. 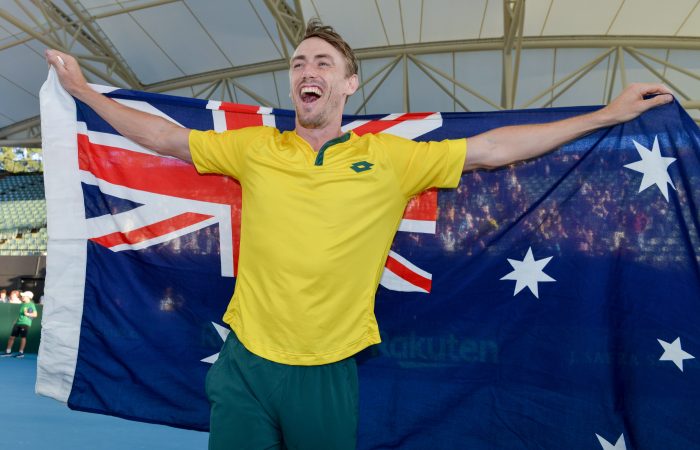 Rather than competing on European clay as he typically does at this time of year, the 30-year-old is at home in Brisbane.

“Obviously unprecedented times has created this opportunity for players to spend a little bit more time at home than what they normally would. It’s a little bit different, but I’ve gotten used to the home life now and things aren’t going too bad here,” he says.

The suspension of the tennis tour, as well as closure of tennis and gym facilities, has created new challenges for Australia’s No.3-ranked man.

“I’ve got the home gym set up and I’ve got every app under the sun with the indoor training bikes. I’m connecting with a few of the Aussie players who also have those apps and just trying to stay fit,” Millman says.

“A big part of my game is the physicality that I bring to the court, so I don’t want to lose that and it’s quite easy to do so when you’re spending a fair bit of time away from the day-in, day-out grind of the tennis tour.”

I’m keen to have a @GoZwift race with any of the tennis community or wider community that have the app and an indoor training bike. I know the @the_LTA team have some bikes and a couple of the Aussie players. Anyone keen?

The world No.43 is no stranger to setbacks, having recovered from several surgeries earlier in his career.

“I’ve had a couple of experiences and episodes where I’ve spent a bit of time on the sidelines trying to recover from some pretty significant surgeries, but this a little bit different,” he admits.

“My body is actually not in a bad place, but the tough thing about this is motivation and not having an end date in mind. At least with the shoulder surgeries and groin surgeries you could earmark tournaments you thought you could get back to, but right now, there is really so much uncertainty and a lot of speculation on when we will get back playing. It’s a little bit trickier, but I think setting daily goals, daily routines can really help keeping that motivation nice and high.”

With his court-time currently limited due to the closure of public courts across Queensland, Millman’s daily routine and goals have a fitness focus.

“What you can do is you can get stronger in the legs, stronger in the upper body,” he explains. “You can do the little things that sometimes don’t look as if they are not going to make much of a difference, but based on experience and drawing upon that experience, it does help.”

Millman set a career-high ranking of No.33 in 2018, shortly after stunning Roger Federer to reach the US Open quarterfinals. He maintained his year-end top 50 ranking last year, with a final run in Tokyo a highlight.

Keen to return to competing as soon as possible, Millman is advocating for the introduction of a new domestic competition should Australia continue to flatten the COVID-19 curve.

“I do feel that Australia, and right now – touch wood – we are trending in the right trajectory, that we might be able to beat this sooner rather than later and hopefully in doing so, the restrictions can ease a little bit and we can get back to playing tennis,” he reasons.

“But tennis isn’t going to be how we know it. I’m a big believer that the ATP Tour or the WTA Tours can’t resume until we really defeat this thing globally because so much of tennis involves a lot of international travel.”

What happens if the Australia recovers before the ATP/WTA Tours are set to resume. Here’s an idea. Thoughts? pic.twitter.com/rrkJtJERsW

Should international travel remain banned, Millman’s idea is an interstate competition involving past and present players.

“I do feel as if it’s a really good opportunity right now though to develop the game domestically,” he says.

“I threw the idea out of having a bit of a team competition with interstate rivalries … I’d love to get all the former champions involved, the current crop of players and really have it out.

“I think it’s a great opportunity to celebrate both our history of tennis, but also the group of players we’ve got coming through right now.”

Highlighting both his competitive nature and rich appreciation of Australian tennis history, Millman is excited about the prospect of sharing the court with former world No.1s Lleyton Hewitt and Pat Rafter.

“Maybe I’m just a bit of a kid in that sense,” he laughs.

“I just want to get on court with them to be honest, I’m pretty selfish.”

Yet selfish is a word not usually associated with Millman, who is widely respected in the tennis community for his hard-working nature and leadership qualities. He demonstrated that early in 2020 – pushing Federer to five sets in a Rod Laver Arena thriller at the Australian Open while competing with a calf injury, then leading the Australian Davis Cup team to victory with two steely singles wins in Adelaide in March.

Whether a domestic team competition eventuates or not depends on many different factors in a challenging time for the sport. For now, Millman is happy just to stimulate conversation on a game he is dearly missing.