An exceptional start to the 2020 season for James Duckworth demonstrates the power of never giving up on your dreams. 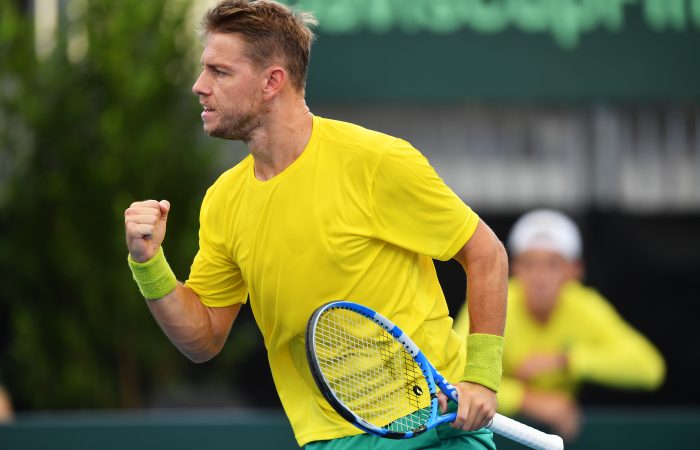 With a new career-high ranking, first ATP-level semifinal and a long-awaited Davis Cup debut, the milestones have quickly stacked up for James Duckworth in 2020.

These achievements are even more remarkable considering that two years Duckworth was unsure whether he would ever play again.

Still only 26 at the time, Duckworth’s frustrations were mounting after undergoing five surgeries in the space of 13 months. Following right foot surgery in February 2017, Duckworth had right shoulder surgery a month later. Two more right foot surgeries in August 2017 and January 2018 were required, before a right elbow complaint also needed surgical intervention in February 2018.

“It was really tough,” Duckworth related to Australian Tennis Magazine.

“Having to sit and watch the big tournaments that I really enjoy playing was pretty difficult.”

Yet as he underwent rehabilitation at his Brisbane base, Duckworth’s determination to return never waned.

“I was pretty driven to get back playing. It is something that I love. I love being out on court and competing. I always had that in the back of my mind that I was desperate to be back out here,” the 28-year-old said.

“There was weeks and months were I wasn’t improving a whole lot. It was difficult waking up each day and not knowing if I was going to get better and get back on court.

“(But) I had a very good support team around me. My family and team up in Brisbane were always pushing me.”

Duckworth’s support system includes his father David, who is a surgeon, and grandmother Beryl Collier (nee Penrose), an Australian Tennis Hall of Fame member who won four Grand Slam titles across singles and doubles on home soil in the 1950s.

“I’m really happy I was able to push through those tough times,” Duckworth said.

“I think after going through those tough periods, you really appreciate these good times more.”

Duckworth made his return to tour in 2018 and improved his ranking over 700 places to finish his comeback year inside the world’s top 250.

His form and confidence continued to build in 2019, winning four ATP Challenger titles to re-enter the world’s top 100 by year-end. It was the first time since May 2017 that Duckworth had featured in the top 100 and guaranteed direct entry into the Australian Open.

After pushing world No.55 Aljaz Bedene to five sets in his first-round match at Melbourne Park in January, Duckworth teamed with compatriot Marc Polmans to reach the doubles quarterfinals as a wildcard pairing. Having never previously won a Grand Slam-level doubles match, the stellar run helped Duckworth achieve a career-high doubles ranking of No.185.

In his next tournament in Pune, Duckworth advanced to his first singles tour-level semifinal. An 11th career ATP Challenger title followed, propelling him to a new career-high singles ranking of No.71 – 11 places higher than his previous best achieved in May 2015.

One week after reaching his first @atptour semi-final in Pune, @JamesDuck21 lifts the 🏆 in Bangalore, claiming his 11th #ATPChallenger title.

It was while building his 8-1 win-loss record in India in February that Duckworth received a call from Australian Davis Cup captain Lleyton Hewitt.

“He actually called asking if I would make myself available (for Davis Cup) if I was selected. I can’t believe he even asked me that question – I said ‘of course, I’d pull out of any tournament you want’,” Duckworth said.

Duckworth became the 111th player to represent Australia in the Davis Cup competition, making his debut in a qualifying tie victory against Brazil in Adelaide in March.

Duckworth teamed with John Peers in doubles during the tie, losing a tight three-set match in a deciding set tiebreak.

“Obviously it was disappointing not to get the win (in doubles), but it was a really good week. It was awesome to be part of this group,” Duckworth said.

“Hopefully I can be part of this again.”

What a weekend! So lucky to be a part of this incredible team #nogreaterhonour https://t.co/cbYW3Vun8C

After his memorable start to 2020, Duckworth has had to re-evaluate his season goals.

“At the start of the year, it was to get past my career-high ranking of No.82 which I was able to do early on and also a goal of mine was to play Davis Cup. I’ve ticked those two, which is nice,” he said.

“I’d like to a little better at Grand Slams. I’ve only ever made the second round, so a third round at a Slam would be nice. I guess ranking wise, top 50 is the next goal.

“The key thing for me is to stay healthy. If I can stay healthy for a full year, hopefully these goals will take care of themselves.”