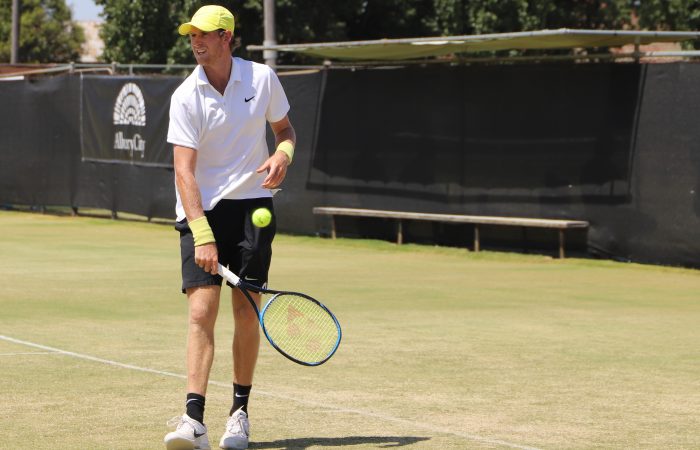 The Tasmanian cruised through his match against qualifier Jordan Smith 6-1 6-4 after an equally compelling first-round victory over Benard Bruno Nkomba.

“Having a pretty convincing win first round and then backing it up, I’m happy with my form and consistency,” Bourchier, 24, said. “I thoroughly enjoy the grass courts here in Geelong, it’s a new event but the tournament and the club are doing a really good job so far.”

Bourchier isn’t feeling any extra burden carrying the No.1 seed mantle and sees it as a reward for effort after a successful 2019 which saw him rise to a career-high world No.279 this January.

“Obviously, I had a good year which has put me in that position, but I’m just taking it one match at a time and not putting any additional pressure on myself,” he said.

“Everyone is playing well and anything can happen.”

Other matches on Thursday saw a two-and-a-half-hour battle between second-seeded Victorian Dayne Kelly and compatriot Alexander Crnokrak. Kelly dominated early before Crnokrak turned up the heat before a deciding tiebreaker determined the match. Both men alternated match points, with Kelly eventually taking it 16 points to 14 for a memorable 6-2 6-7(7) 7-6(14) victory.

French qualifier Vincent Stouff was again in tremendous form taking down fellow qualifier Jake Delaney to advance through to the quarterfinals as the only remaining unseeded player in the draw.

Third seed Luke Saville, Japan’s Rio Noguchi (No.4), Brit Brydan Klein (No.5), Yu Hsiou Hsu (No.6) and Victorian Matthew Romios (No.8) all managed to get through their matches unscathed.