Australia's top players have overcome many challenges in their respective journeys to current heights – providing many lessons to players at every level. 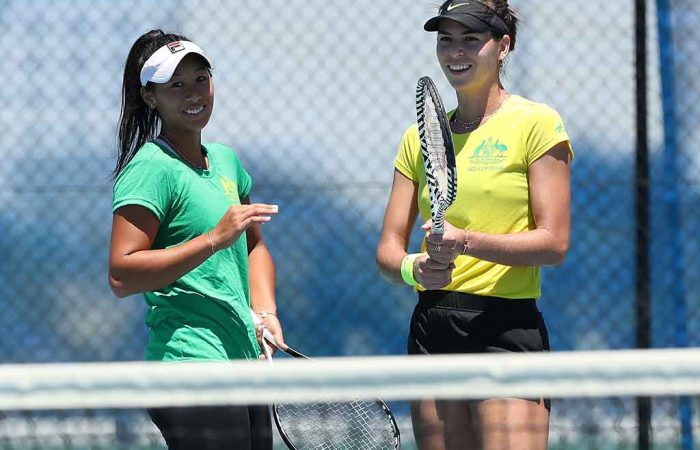 Too short, too out-of-place, too different from her sisters and other young girls: Ash Barty is far from shy in sharing the many barriers that she faced on her path to become a Grand Slam champion and world No.1 – and she’s equally keen to share the rewards of following her own path in the sport.

“The options are open,” said the popular Queenslander last November as she launched a marketing campaign encouraging more girls to participate in tennis. “There are other things you can do, but the sporting life style is incredible.”

It’s a spirit that flows through the tight-knit group of Australia’s top female players – who have not only supported each other through many challenges, but also draw on a collective goal to achieve new heights on tour.

As the Play for You message continues to resonate with players at every level, we asked some high-achieving women to share the barriers they faced on their path to professional success, as well as the advice they would give their younger selves and other players.

Currently sitting at a career-high world No.112 after multiple victories on the Australian Pro Tour.

You’re definitely going to go through times where you’re not going to love it as much. You won’t love the travel and the training every day – but when you are doing well it’s so rewarding, and you have to go through those times to have good times.

Obviously it’s a really long journey being a tennis player. I did well when I was a bit younger. I played the Australian Open when I was young and while I appreciated the opportunity at the time, (it was) nowhere near as much as I appreciate it now. I also found (there was) a lot of pressure after that.

If you want to make it a long, fun and successful career you’ve got to enjoy it. There’s no rush – the stat is that you peak in your late 20s, so if you’re not doing well now, keep putting in the work and keep enjoying it and I think it will come. (I’d tell myself) to be competitive on court but also have fun off the court. I think that’s the most important thing for me as a player.

Peaked at world No.119 after a quarterfinal run in Hobart, where victims included higher-ranked Kristyna Pliskova and No.8 seed Caroline Garcia.

I’d give my younger self a little pep talk about not focusing too hard on results, especially at a young age and just not worrying about what other people think. If you have a dream, just keep going for it. I think back then I focused too much on what was going on around me and put too much pressure on myself at a young age. Whereas now I’m really focused on my journey and really supportive of the other Australian girls, which has helped a lot for me personally. So I think just not comparing yourself, just working hard and believing that you can achieve anything that you set your mind to.

After a successful US college career, where she gained a medical degree while developing her tennis, Sharma’s rapid progress in 2019 included a first WTA final and career-high No.85 ranking.

I played any and all sports when I was growing up – basically anything my brother wanted to do, I would try and follow him. It’s not very usual for many girls to be that active but I was doing little athletics, I did swimming, I did soccer and I did tennis. Being able to kind of latch on to my brother, I saw that a lot of girls didn’t have that – being too athletic or like being too overly involved? in your sport was a bit more frowned upon, you could tell in schools the perception was like a little bit off .

There are so many amazingly talented young girls out there that just aren’t as encouraged as (much as) a young boy. If a boy is really into AFL that’s very like ‘oh we’ve got to take him to footy every weekend’ but for a girl it’s a lot more ‘Oh would you like to do arts? Would you like to do gymnastics’ Stuff like that where it’s not quite encouraging them.

Member of the team that took Australia to the 2019 Fed Cup finals and at world No.129, Australia’s current No.7 player.

I started doing home-schooling at a young age. I didn’t have that many friends – more when I went into tennis (and) I was always around the tennis girls. So Kim (Birrell) and Lizette (Cabrera), I’ve known since I was nine years old. That was big for me, the social part, because a lot of girls I feel like they drift away because they miss that social part.

When I was around 16 or 17, I went through a stage where I didn’t want to play anymore, and I took a little bit of time off.  I wasn’t playing very well and then my coach didn’t really believe in me. It was a lot for a teenager – when your dream is to become a tennis player, that it’s kind of getting knocked down. I just had to find a good team around me that actually believed in me and then that kind of took me out of (that difficult period).

There was a video when I think I was maybe turning 10 (when I said that) my dream was to play the Australian Open. I didn’t see that until last year and obviously I’ve achieved that. Just having these goals in my mind, reaching them, and obviously playing Fed Cup was a big one. Being able to do that is really fulfilling.

From big dreams to even bigger milestones …

Contesting qualifying at three of the four Grand Slams in 2019, the 22-year-old cracked the world’s 200 and set her sights on more career milestones.

(The biggest barrier is) the travelling. Being away from home. I always love being at home with my family and my loved ones. For me that’s the only thing about tennis that’s a barrier. It’s definitely the travel and the time away from home.

It is not a sprint. You have so many years to get where you want to be. There’s no need to win every match and I would probably say to focus on the things that are going to help your game in the future rather than just getting through that one match. That’s the one thing I would tell myself.

Rebuilding her game after an injury break, the popular Queenslander peaked at No.157 after a career-best run at Australian Open 2019.

At school, there is so much pressure on girls. I was a tomboy running around with boys in the playground and all of a sudden, if you go to a private school, your uniform changes and you’re wearing a long skirt and shoes with a heel. Even the uniform itself restricts you from going out and running around and doing cartwheels and stuff on the playground, whereas the boys are wearing shorts and sandshoes. So it’s definitely things like that, that make it hard for sporty girls. But there’s nothing wrong with being interested in things that not most girls are interested in. You just have to own it.

It’s tough when you start to be a little more serious. You definitely do need to make sacrifices and that can be really hard when you have friends that aren’t necessarily on the same path as you in sport. They may not understand why you can’t go to this party or you’re not at school for a week or two … that’s why I think it’s super important to find friends that are kind of on the same path as you too.

I would say don’t take anything for granted. I’ve struggled through a few injuries during my career, so if I could say anything it would just be look after your body and sometimes less is more, you don’t necessarily have to be out on the court doing stuff, dusk till dawn.

It’s really important to have interests outside of tennis. Find a good group of people that you want to be around. I’m super lucky that through tennis, I’ve met some of my very best friends that I know will support me on the court, off the court – no matter what I’m doing for the rest of my life, even when I’m retired.