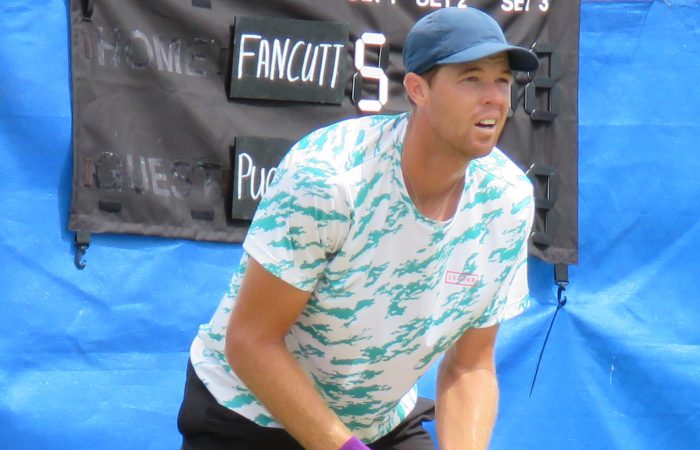 Qualifier Scott Puodziunas stunned the top seeds in Mildura, making his way to the semifinal with two upset victories.

With rain impacting the Mildura Grand Tennis International earlier in the week, it was left to play both second round and quarterfinals matches on Friday, and the 30-year-old doubles specialist took full advantage.

“I haven’t played much singles in the last two years,” he said. “I’ve just purely focused on doubles, but I’ve been serve and volleying a lot and it’s helped my singles game.”

“Against Luke, it was basically just a couple of points here and there,” he said. “But I’ve played six matches now, including the three in qualifying, and I haven’t been broken once, so I think I’m serving pretty well.

“The grass is helping me out a lot.”

With no current singles world ranking, the doubles world No.172 has reached only his second Australian Pro Tour semifinal. “Once in Alice Springs I had a pretty good run, but that’s it,” he said.

Puodziunas joins three of the tournaments’ four top men’s seeds in the last four, with top-seeded Victorian Dayne Kelly, Brit Bryden Klein (No.3) and Rio Noguchi (No.4) all winning their way through.

With Kelly taking on Klein for a finals berth, Puodziunas will need to use his height and power to overcome Japan’s world No.424. “He’s a good returner, so that’s going to be a pretty interesting one. Hopefully, I can get him with a few sliders wide,” he said.

Puodziunas also found himself in more familiar territory on the doubles court on Friday with his partner in Klein, the top-seeded pair easing their way into the final.