Jordan Thompson and John Millman carry Aussie hopes on day one of the Davis Cup qualifying tie against Brazil in Adelaide. 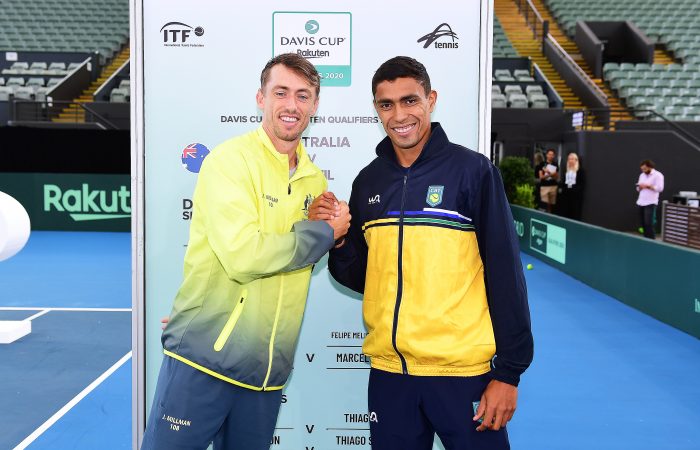 Australia’s bid to qualify for the Davis Cup by Rakuten Madrid Finals in November begins tomorrow in Adelaide. Facing Brazil at Memorial Drive Tennis Centre, victory is needed to secure a place in the 18-nation finals.

World No.63-ranked Jordan Thompson opens play, facing top-ranked Brazilian Thiago Monteiro.
“When you go out there for your country, it gives you goosebumps. Playing first match on, I think that will be good for me,” Thompson says. “When I hear the national anthem playing, I think it will put me in the right frame of mind.”
It marks the fourth time Thompson plays the opening singles rubber in a Davis Cup tie.
“You don’t want to be too pumped up but also you don’t want to try and downplay it either,” the 25-year-old says of the experience. “I’ve been in this position before and haven’t really let it get to me too much. I’ll just go about my business as usual.”
Thompson, who owns a 6-4 win-loss record in Davis Cup, has never previously played his No.82-ranked opponent.
The 25-year-old Monteiro has a 7-6 win-loss record in Davis Cup and is 2-5 on hard courts.

“I have absolute confidence that they are going to go out there, play extremely well and leave it all on the court – not just for me and the team, but for the whole of our country," says captain @lleytonhewitt #GoAussies | #AUSBRA | #DavisCuphttps://t.co/q1q0sdbFM7

Spearheading the Australian Davis Cup team for a first time, world No.43-ranked John Millman faces a rising Brazilian. Thiago Seyboth Wild, the winner of the US Open 2018 boys’ singles title, proved why he is one of the world’s most highly-rated teens when he claimed his maiden ATP title on clay in Santiago last week. That result propelled the 19-year-old to a career-high ranking of No.113.
“It’s going to be difficult,” Millman says of the match. “Whenever you play against someone who’s got winning form, it is good form. I’ve watched a little bit of him. He looks very confident and he’s obviously enormously talented. We’re going to see a lot of his name I’d imagine.”
With Seyboth Wild making his Davis Cup debut, the 30-year-old Millman holds a valuable edge in experience.
“He’s going to be raring to go,” cautions Millman, who made his Davis Cup debut in 2017 and has a 1-2 record in the competition.
“I remember what that feeling is like. It is indescribable when you walk out on court and the national anthem is playing. It’s really special and I’m sure he’s going to be feeling those emotions too.”
Millman hopes a vocal Adelaide crowd can make a difference too.
“It’s going to be an extremely tough battle, but to be able to do so in front of a home crowd is something I’m really looking forward to,” he says.

TV GUIDE: Find out how to watch

Single session tickets and two-day packages for the 6-7 March tie at Adelaide’s Memorial Drive Tennis Centre are available via Ticketmaster.