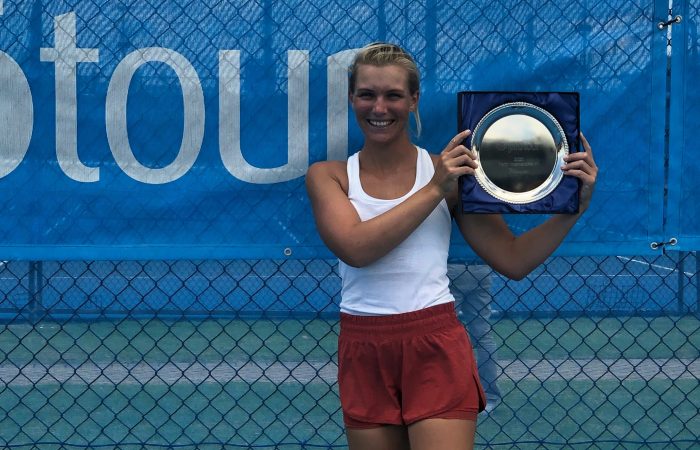 “It was my best match throughout the week,” Inglis, 22, said. “I was super happy to win and to do it in front of my friends and family was really special.

“It’s probably the happiest I’ve ever been in winning a title, just because everyone was there and I could share it with them.”

An early break gave the top seed an advantage that saw her take the opening set, before Aiava (No.5) brought out her power game to seize the next five games. However, a dogged Inglis held her nerve to redress the balance, before claiming a gritty tie-break to take the title, her first at home after reaching the semifinals two years ago as a wildcard.

Now on a ten-match winning streak after claiming Burnie – her first ITF USD$60,000 title – in late January, the world No.119 is well-prepared as she heads to the United States this week in a bid to crack the top 100.

“The last two tournaments have been really good for me and I’ve got a bit of confidence in getting through some of these close matches,” she said. “I’m really looking forward to playing some bigger tournaments now and seeing how I go against those girls.”

The doubles title was taken out by Japan’s Kanako Morisaki and Erika Sema (No.2) on Saturday, after they ousted top-seeded ANZ duo Jaimee Fourlis and Erin Routliffe 7-5 6-4.