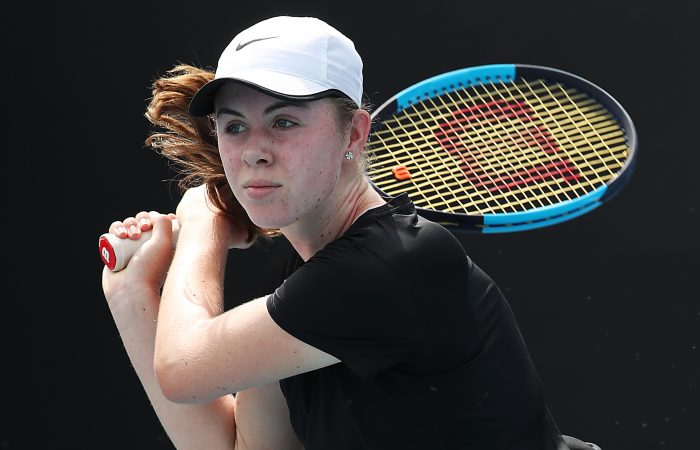 After demonstrating her potential with a solid opening round win at the Perth International #1 earlier in the week, local wildcard Talia Gibson was unable to continue her run on Thursday, despite a gallant attempt.

The 15-year-old dropped the opening set to Frenchwoman Irina Ramialison, which only motivated her to add pace to her already clean-hitting, taking the match to a decider. Gibson continued to dominate, racing out to 5-1 and setting up match point a game later. However, a couple of errors switched the momentum completely, with the teenager unable to stay firm, and Ramialison was able to capitalise, taking the tiebreaker and the match, 6-4 3-6 7-6(4), leaving the young West Australian with a bitter pill to swallow.

“Today was up and down,” she said. “I think that maintaining my focus was the main issue.”

Gibson, the reigning 16/u Australian Girls’ champion, competed in the recent Australian Open Junior Girls event where she reached the second round. “I’m planning to try and play all the junior Grand Slams this year if I can get into them,” she said.

Gibson will also appear in next week’s event in Perth. “I got a wildcard into the main draw which is really good, lucky to get that one.”

Ramialison will face Japanese qualifier Shiho Akita in the quartefinals, after her 6-1 6-2 win over fellow 30-year-old, Zuzana Zlochova of Slovakia.

For the Australians, local favourite and top seed Maddison Inglis continued her run of form with a flawless 6-1 6-2 win over Ivana Popovic, and her upcoming quarterfinal match-up against Swiss Leonie King (No.6) promises to be a highlight.