Top seed Elina Svitolina was too good for Storm Sanders in Thursday night at the WTA event in Hua Hin, but the Australian had plenty of reasons to be optimistic about her singles game. 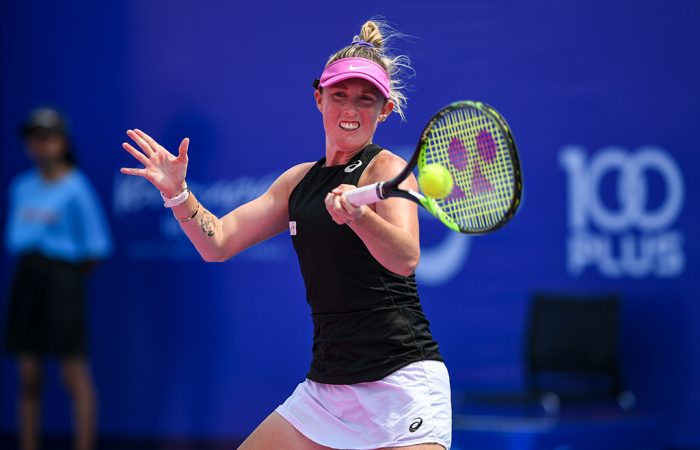 Despite a 6-1 6-2 loss in under an hour to Elina Svitolina on Thursday night, Storm Sanders was remarkably upbeat.

And that’s because her week in Hua Hin contained several breakthroughs — and is still not over.

World No.4 Svitolina was the first top-10 opponent Sanders had ever played in her career, and it was the first time she had taken on a player inside the top 20 in more than six years.

“She’s obviously a really, really good player, top five, and yeah, she’s probably going to win a Slam soon. It was a cool, amazing experience to play her,” Sanders reflected.

“I actually thought I had a few chances to get it to be even in the first set and I probably pushed a little bit too hard and pressed a bit too early, making some unforced errors.

“I think that’s what the good players do — they make you feel that pressure and make you try and go for a little bit more.”

By reaching the second round in Hua Hin, Sanders matched her best ever WTA main draw performance, having reached the same stage in Hobart all the way back in 2014.

The fact she began the week in qualifying and won three matches to set up the Svitolina clash was another positive step in her singles comeback — which began in October last year — and it marked the first time she had won through qualifying to reach a tour-level main draw since Nanchang in August 2016.

Her run in Hua Hin improved her win-loss record in 2020 to 6-3, and means she has won 18 of 23 matches since returning to the singles court at the 60K Australian Pro Tour event in Bendigo.

Prior to that, she had been beset by injuries that saw her abandon singles for two years, and, when healthy, focus solely on doubles.

“I’ve had a really good week here in singles. I qualified and won my first round and I haven’t done that since, like, six year ago. So yeah, I’m really happy with that. It was a good week, so far. Still got doubles,” said Sanders, who won through to the Hua Hin semifinals with Arina Rodionova later on Thursday night.

“(I’ve appreciated) just playing at a bit of a higher level and trying to win matches back-to-back and just go out there feeling good.

“(In terms of rankings) I think I’ll go inside 300, probably about 270, which I’m pretty happy with after about five or six tournaments.

“Hopefully that opens a few more opportunities with some WTA qualifying events, and just getting into main draw of some ITF events too.

“I’m looking to play qualies of Slams so I’ve got to get my ranking up a little bit higher, but it’s an exciting start to the year.”

Sanders and Rodionova will take on Ankita Raina and Rosalie van der Hoek for a place in the doubles final.