Storm Sanders has equalled the best tour-level result of her career with a first-round victory at the WTA event in Hua Hin on Monday. 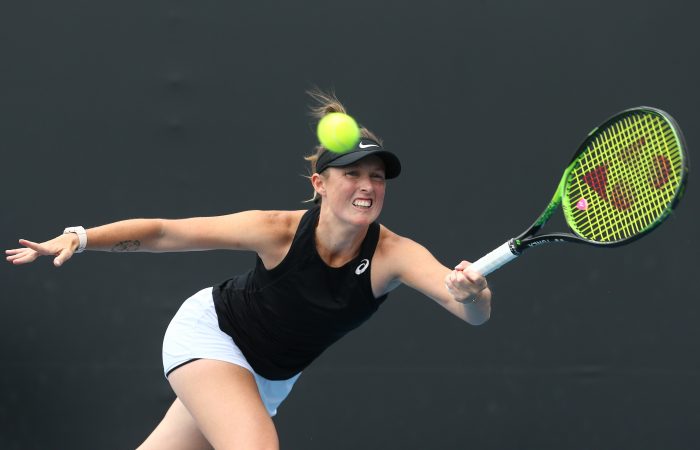 Australia’s Storm Sanders is through to the Thailand Open’s round of 16 after beating Norway’s Ulrikke Eikeri in straight sets.

The 25-year-old qualifier cruised through her Monday clash, after both her earlier matches stretched to three sets, beating Eikeri 6-3 6-4 at the beach resort of Hua Hin, south of Bangkok.

Sanders is particularly happy she didn’t have to face another home hope in front of the Thai crowd after her match with Peangtarn Plipuech.

“It was a good match, tough conditions, but it was good to see a lot of people out there supporting both players,” she told the WTA website.

“Having the two matches under my belt was really helpful but I was really happy to play just two sets today. It was also a bit cooler, playing a bit later today and I was really clear with my game.”

Sanders will next face the winner of Wednesday’s clash between world No.4 Elina Svitolina and Dutch ace Bibiane Schoofs.

Despite the tougher task, she’s confident she has done enough preparation.

“I’ve played a lot of matches out here already and had a lot of court time so I’m feeling good and looking forward to a tough match next round,” Sanders said.

Indeed, Sanders is riding a three-match winning streak in Hua Hin, with her latest victory taking her win-loss record in 2020 to 6-2.

Since her comeback to singles in October last year, the left-hander has won 21 of her 26 matches, a record that also includes her run to the final of the AO Play-off in December.

By reaching the second round in Hua Hin, she has equalled her best-ever tour-level result; six years ago she advanced to the second round of the WTA Hobart tournament, also an international-level event.

The last time she qualified for a WTA main draw came in 2016 in Nanchang, China.

Meanwhile, Sanders’ compatriot Arina Rodionova and fellow Australian qualifier Ellen Perez both bowed out in Hua Hin after straight-sets defeats in the first round.