Purcell and Saville: poised to take the next step

Following their Australian Open finals appearance, the all-Australian duo have tour-level success and Davis Cup representation in their sights. 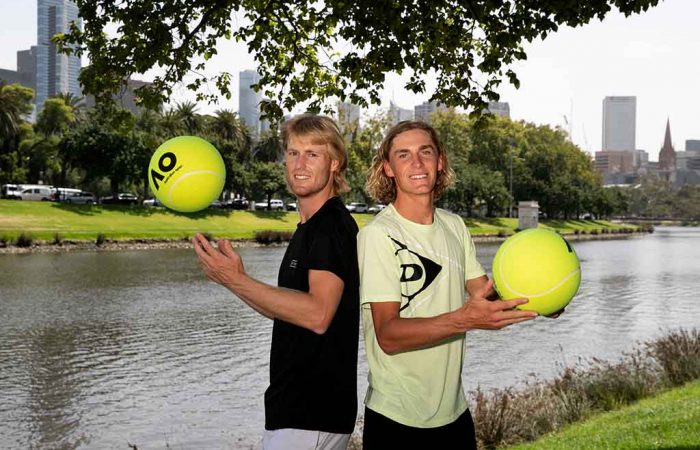 Except all of those wins came on the Challenger circuit.

They won seven titles at that level, yet only competed in four matches at tour-level, losing them all.

The duo won five matches to storm into their first Grand Slam final, a result that boosted their rankings to No.38 for Saville and No.41 for Purcell.

“Things have been clicking for the last year and a half to be honest,” Purcell said after the duo’s 6-4 6-2 loss to Rajeev Ram and Joe Salisbury on Sunday at Rod Laver Arena.

“(But) we’ve only played three other ATP Tour-level tournaments. I think if we were week-in and week-out, being able to play them, I think we’d have some results like this for sure.

“Maybe a Grand Slam’s different – we didn’t expect this. But I think we’d always been playing well together and I guess it was only a matter of time before a result came.”

The duo defeated some impressive partnerships at Melbourne Park, notably No.8 seeds Jean-Julien Rojer and Horia Tecau in the second round and fourth seeds Ivan Dodig and Filip Polasek in the semis.

That last win took their win-loss record to a perfect 9-0 in season 2020, a year that began with their ATP Challenger title in Bendigo.

“I think at some point it will hit me how we’ve done, but at the moment, just happy with where our game’s going and I guess if we can continue some kind of the same form throughout the year, then that’s great.

“That’s life changing: a bit more money, being able to bring more coaches on the road, I think that’ll be more beneficial for our games.

“But we’re so early on in our careers still … who knows (where it will lead)?”

After both entering the Australian Open ranked outside the doubles top 80, Purcell and Saville each entered the world’s top 40.

This opens up incredible opportunities for the duo in the doubles realm, including entry into higher-level ATP events such as 500s and Masters 1000s as well as direct entry into the Grand Slams (they were wildcards at Melbourne Park).

“We’re still going to try and play a singles schedule, but we’re going to pick and choose where we play together,” Saville explained.

“Just the fact we can play a lot of those bigger tournaments and experience these courts and playing better opponents each week, it’s definitely a great experience for us.”

This higher standing in the game also gives the duo new targets to shoot for.

“(The Olympics) wasn’t on our radar before this tournament; now I guess it is,” Saville said.

“Also Davis Cup comes onto our radar as well. We feel like we are inside the top three ranked doubles player in Australia. I think Peersy (world No.23 John Peers) still holds that top spot so be tough to knock him off his perch.

“But we’d love to play for Australia, represent our country. Obviously we’ve got a tie in Adelaide in March.

“We feel like we combine well and we think there’s a spot there in the doubles that can be taken. Obviously we’re not selectors, but this is a big result, and we’re young, and if we could take that doubles spot in years to come, there’s definitely an opportunity for that.

Purcell earlier referenced their Australian Open prizemoney, which for reaching the final totals $380,000 – a cheque they split between them.

Both players acknowledged how crucial this was as they looked to continue their rise in the men’s game.

“A pay day like this, we can play a little freer, and like Max said, we can potentially bring a fitness trainer and a coach on the road for more weeks,” Saville said.

“And I guess we can maybe fly business every now and then, treat ourselves (smiling).

“This is our biggest pay day by a mile, we’ll let it sink in a little bit. Both of us just want to get better as tennis players so that these dollars will just go back into our tennis, in order to get better as players.”