Astra Sharma and John-Patrick Smith's hopes of reaching a second Australian Open mixed doubles final are dashed by Bethanie-Mattek Sands and Jamie Murray in the semifinal. 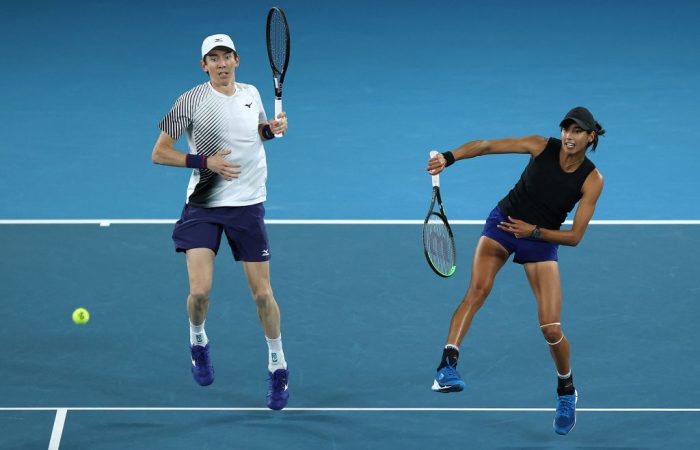 The Australian pair staged a highly competitive battle against their more experienced opponents, with memories of the 2019 finals appearance clearly still strong.

In Melbourne this fortnight, Sharma have recorded wins over all-Australian duo Belinda Woolcock and Blake Mott, Sam Stosur and Julien Rojer and Polish No.3 seeds Iga Swiatek and Lukas Kubot.

But with the semifinal marking a repeat of the 2019 quarterfinal, when they upset Mattek-Sands and Murray, there was added motivation for the American and British combination.

The course of a 30-minute first set was partly determined by a break of the Sharma serve in the fourth game, but an extended second set remained evenly matched throughout.

With another break of the Sharma serve in the 11th game, Mattek-Sands immediately served for victory but was unable to consolidate.

The visitors gained control in the tiebreak, racing to a 6-1 lead and soon holding a flurry of match points. Sharma and Smith saved four of them in a determined display, before a backhand error from the under-pressure Sharma secured the visitors’ win.

“Melbourne is really good memories for me. This is where I got my first Grand Slam final,” said Bethanie Mattek-Sands, who has relished the support in Melbourne since she claimed the 2012 mixed doubles title with Horia Tecau.

For Murray, 2020 marks his best Australian Open mixed doubles performance, the highly accomplished doubles having never progressed beyond the semifinals until now.

“We lost to them last year in a tough match,” said a smiling Murray of today’s performance. “We wanted revenge.”

Mattek-Sands and Murray will now aim to continue that momentum against Barbora Krejcikova and Nikola Mektic, from the Czech Republic and Croatia respectively, who defeated Garbriela Dabrowski and Henri Kontinen 6-3 3-6 [10-5] in the other semifinal.