Momentum building for Purcell and Saville

Through to the Australian Open men's doubles semifinals, Aussie wildcards Max Purcell and Luke Saville are determined to continue their winning run. 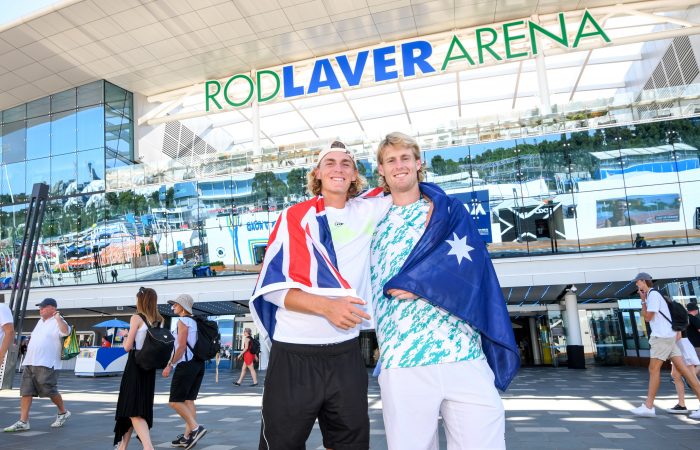 Max Purcell and Luke Saville are enjoying a career-best run at Australian Open 2020, advancing to the men’s doubles semifinals.

The wildcard pairing are continuing the impressive momentum they have built on the ATP Challenger Tour, where they have won eight titles in the past 13 months.

“We’ve known our level has been really good at Challengers, but to do it at a Grand Slam and here at home in Australia, we couldn’t be more happy,” says 25-year-old Saville.

The duo are currently on a 12-match winning streak dating back to October. They began their 2020 season with a title-winning run at an ATP Challenger in Bendigo and then defeated two-time Grand Slam champions Horia Tecau and Jean-Julien Rojer during their Australian Open run.

“We’re on a bit of a roll and I think it’s really showing in our doubles with how confident we are,” says 21-year-old Purcell.

“We always thought we could prove it at tour-level. We weren’t exactly expecting a result like this – but we were expecting to be able to test ourselves with the best. We’re happy that all of our hard work is paying off.”

Wildcards @MaxPurcell98 and @LukeSaville18 maintain their stellar form to def. Gonzalez and Skupski 6-2 6-4 to reach the #AusOpen semifinals for the first time.#AO2020 pic.twitter.com/V6YzTp6AFk

Fourth seeds Ivan Dodig of Croatia and Filip Polasek from Slovakia await in the semifinals. Finalists in Adelaide earlier this month, the experienced duo have not dropped a set at Melbourne Park.

“They are a pretty dangerous pair. They’ve been playing very well and knocked off the Bryans reasonably comfortably this week. We can look at their results and form, but they can look at us and see we’ve won a lot of matches as well,” Saville says.

Their semifinal opens the Rod Laver Arena day 11 schedule, preceding Ash Barty’s singles semifinal against American Sofia Kenin. With Barty creating history as the first Australian woman to advance to the semifinals since 1984, Saville and Purcell are excited about playing in front of a packed stadium.

“It is the biggest and best court we have in Australia – and we’re going to be playing in the semifinals of a Grand Slam on it. What could be better?” Purcell says.

“I think (the crowd) will really help us in the big moments.”

If they win, Purcell and Saville would become the first all-Australian pair to advance to an Australian Open men’s doubles final since Todd Woodbridge and Mark Woodforde in 1998.