Nick Kyrgios outlasts Karen Khachanov in a third-round epic at AO2020 to set up a last-16 clash with Rafael Nadal, while fellow Aussie Alexei Popyrin bowed out to Daniil Medvedev. 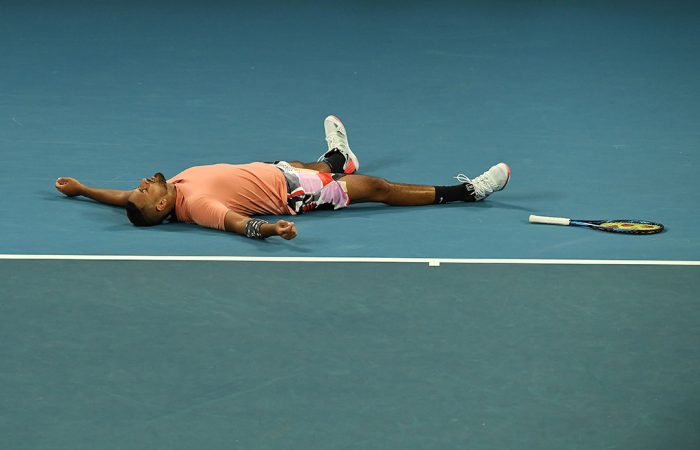 Nick Kyrgios won a dramatic encounter over Karen Khachanov at Melbourne Arena on Saturday night to set up a blockbuster fourth-round showdown with Rafael Nadal at the Australian Open.

Kyrgios led by 4-2 in the third set and held match points in both the third and fourth set tiebreaks before Khachanov, seeded 16th, fought his way back admirably.

Yet Kyrgios, despite looking increasingly drained, steeled himself for a final push in the match tiebreak and sealed victory when Khachanov sent his last shot wide.

"I haven't had a moment like this for four, five years, since I beat Seppi." – @NickKyrgios https://t.co/h6WCErfKtN

“Man, it was crazy. I don’t even know what to say right now. That was insane. I’ve got no words for how I’m feeling right now,” Kyrgios said on court after winning the longest match of his career.

“None of that wouldn’t have happened without my team, that’s for sure. They supported me the whole time. And you guys were unbelievable again.

“I was losing it mentally a bit … my support team, you guys, just willed me over the line. I thought I was gonna lose, honestly.

“It’s emotional. I haven’t had a moment like that for four, five years, since I last played here against (Andreas) Seppi. So that’s definitely one of the best wins of my career, I think. It was insane.”

Kyrgios, who required a visit from the trainer during the sapping contest, is expected to have just under 48 hours to prepare for his match against world No.1 Nadal, which will be scheduled on Monday.

He takes a 3-4 head-to-head record into that clash, with the pair having split their two previous Grand Slam meetings — the most recent of those coming at last year’s Wimbledon, which Nadal won in four sets.

“I just landed on my serve and I felt something, and I got some physio. But it’s just epic. Like, I don’t even know what’s going on. Honestly, my legs feel like about 40 kilos each,” Kyrgios said.

“He (Nadal) has a winning record against me. Whatever happens between us, he’s an amazing player, he’s arguably the greatest of all time.

Earlier on Saturday night, another Aussie, Alexei Popyrin, battled a hip injury as he succumbed to Russia’s Daniil Medvedev in straight sets at the Australian Open.

The Russian fourth seed was too strong for the young Australian, winning 6-4 6-3 6-2.

Medvedev will take on three-time Grand Slam champion Stan Wawrinka for a place in the quarterfinals. He has a perfect 2-0 record against the Swiss veteran, with victories at last year’s US Open and in 2017 at Wimbledon.

Popyrin received medical attention several times during the match and was clearly hampered by his hip.

“I kept feeling pain every time I would jump up on my serve. I felt restricted when I was changing direction or moving. Not the best place to get an injury,” he lamented.

It seemed as if the Australian might retire when he went off for an extended medical timeout at the end of the second set, but Popyrin battled through the pain barrier until the end.

“I just couldn’t pull the pin. My first time on Rod Laver, I just wanted to dig it out and fight,” Popyrin said.

“I kept telling myself to fight throughout the match, even with injury. I still believed in myself. I still thought I could at least push him.

“I reckon I pushed him a little bit on his serve towards the end of the first set. Then the second set, he kind of grabbed his game and started playing really, really well, hitting the ball deep.

“Once he gets on a roll like that, it’s tough to beat him.”