Fast-rising Alexei Popyrin is relishing a rematch with world No.4 Daniil Medvedev in the third round of the Australian Open. 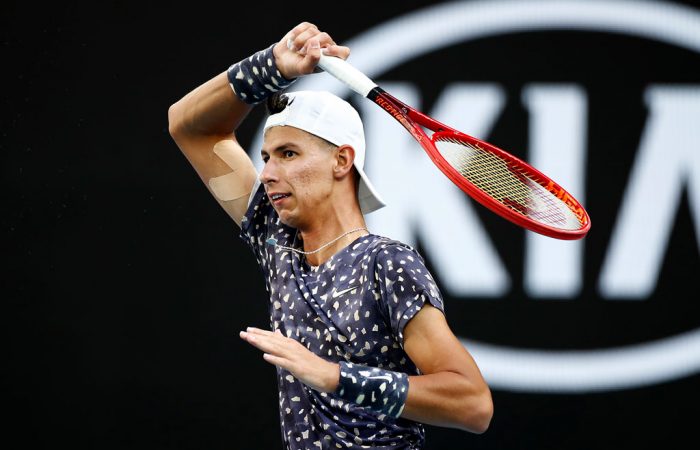 Alexei Popyrin has pledged to get straight onto the front foot in his third-round clash with red-hot Russian Daniil Medvedev on Saturday at the Australian Open.

The rising Australian star extended Medvedev to four tight sets last year at Wimbledon and is relishing the opportunity of another crack at the world No.4.

Medvedev had 59 victories in 2019 – more than anyone else – including a golden streak on his favoured hardcourts late in the year when he won 21 of 22 matches, with the only loss coming to Rafael Nadal in five sets in the US Open final.

Acknowledging that trying to match the sweet-swinging Russian from the baseline is a recipe for disaster, Popyrin will attack the net at every opportunity.

“There are a lot of similarities with our game.

“We’ve both got big serves and we take advantage of that.

“But definitely (attacking the net), I think that’s my only chance of winning.

“My game is to come in. If I steer away from that, then I definitely won’t win.

“I have to play my game against him.”

Popyrin was up a break in the third set of their second-round clash at the All-England Club last year so the Russian is well aware of the threat posed by the Australian.

“When I played him in Wimbledon last year it was a really tough match, an exhausting one, a really close one,” said Medvedev.

“I managed to win it, but already at the Australian Open we saw how he can play in grand slams in front of the home crowd.”

The winner will advance to a fourth-round encounter against either three-time major winner Stan Wawrinka or towering American John Isner.