Ash Barty: Fun and team spirit are No.1

As Ash Barty continues her Australian Open 2020 campaign, the world No.1 is building on a culture of fun, respect and mutual support among women in the sport. 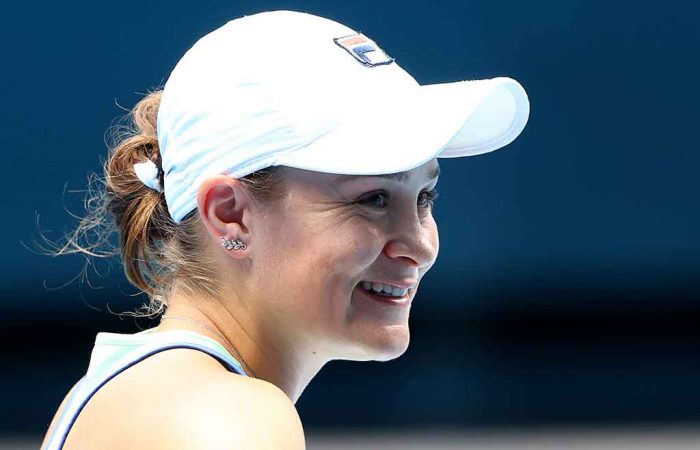 When Ash Barty was asked about the attention that accompanied her world No.1 ranking, the down-to-earth Queenslander had to laugh.

It was a response that showed several things about the popular 23-year-old – including a tendency to not take herself too seriously and a willingness to divert attention away from herself.

Barty did so again after combining with Germany’s Julia Goerges to outclass Australian duo Jessica Moore and Astra Sharma in the first round of the women’s doubles event.

Using the on-court interview to pay tribute to the soon-to-retire Moore, the team-spirited Barty also showed how a culture of mutual support has helped her thrive in the sport.

“It was really exciting for me to be able to share this moment with her,” said Barty. “Jess got me back into this sport. She was my first partner when I came back a few years ago.”

Doubles is also the perfect setting for Barty to demonstrate the message she’s spreading in a campaign to encourage more girls to play tennis – that having fun is the best reason to participate.

“This is what this sport’s about. It’s a game and we love playing it,” said Barty.

“It’s our passion, we love it and there’s nothing better than coming out with your mate and playing tennis, playing this beautiful sport.”

Respect is another common theme among Australian women, Barty also showing that quality when asked how she was “helping” rising Queenslanders Lizette Cabrera and Priscilla Hon.

“I don’t really feel like I need to help them,” said Barty. “Those girls are on their own journey, on an incredible journey. I have a lot of time for those girls. They’re both incredible people and great athletes.”

It’s a view that’s shared by the enduring Sam Stosur, who loves the success-breeds-success culture emerging in the young Australian women edging towards the world’s top 100.

“Because there is such a big group of them that they’re really pushing each other along to get better and better because you don’t want to get left behind,” said Stosur, who equally values the team spirit that exists among that group.

“The bottom line is that they all get along really well and they’re a great group. We want to see those types of girls succeed because they’re doing everything they can (to improve) but they get along and have such good camaraderie between them all.”

It follows that fellow Australian players will be among the many supporters as Barty continues her AO 2020 campaign against Elena Rybakina.

The 20-year-old from Kazakhstan could be a far tougher opponent than suggested by her world No.26 ranking, after she was runner-up in Shenzhen and won Hobart this year.

“For me, it’s about doing what I do best regardless of whether it’s a first round, third round, or a final,” said the top-ranked Australian.

“It doesn’t really matter for me what round it is. I’m still going out there trying to do the same thing.”

And if there’s pressure for the world No.1 Australian, there’s also a collective approach in managing that challenge.

“I feel like I’m doing it the best way that I know how,” said Barty.  “I’m doing it with my team. We’re doing it as a team. We’re loving it. We’re embracing it. There’s no other way to approach it.”