Barty feeling the love ahead of Australian Open

World No.1 Ashleigh Barty will kick off her Australian Open campaign with a first-round encounter against Ukrainian Lesia Tsurenko at Rod Laver Arena. 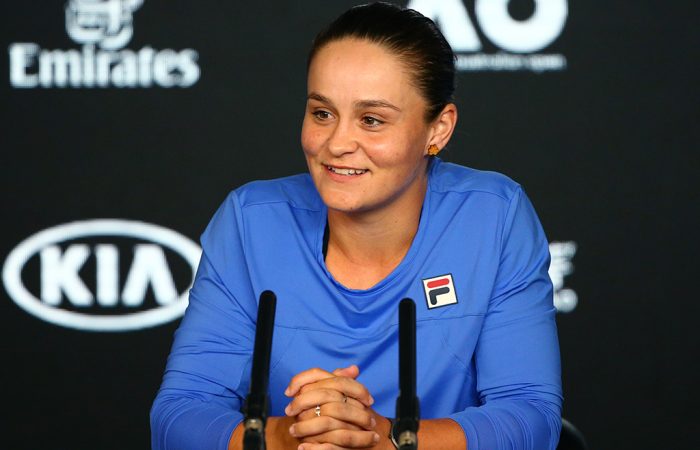 Far from feeling the pressure of being world No.1 at the Australian Open, Ash Barty is feeling the love as she embarks on her quest to win her home Grand Slam.

Barty arrived in Melbourne on Sunday fresh from her Adelaide International triumph, declaring her first WTA title on home soil the perfect preparation for a tough fortnight at Melbourne Park.

She landed in a city where the ‘Barty Party’ is in full swing, with local fans brimming with anticipation at the prospect of her becoming the first Australian woman to win the season-opening Grand Slam since Chris O’Neil in 1978.

The 23-year-old quipped she was already sick of seeing her face splashed across television, newspapers and billboards when she fronted her pre-tournament press conference on Sunday.

Barty will do everything she can to ensure she sticks to the same processes that carried her to last year’s French Open crown and the No.1 ranking.

But she concedes playing in front of an adoring home crowd won’t be a typical tour experience for her.

And neither would she want it to be.

“I think just because we don’t get to play in Australia all that often. We get a month at the start of the year, then with Fed Cup every now and again you get a home tie.

“I think it’s a bit of a feeling when you walk out on the court, it’s almost electric that the crowd’s involved, that I’ve got so much love and support from the crowd.

“It’s amazing … I think when they really get invested in the match, it’s really special.”

Barty kicks off her campaign with a first-round encounter against Ukrainian Lesia Tsurenko in the first match of Monday’s evening session at Rod Laver Arena.

The world No.120 got the better of Barty in their last meeting at the Brisbane International in 2018, but a lot has changed since then.

“I know I’ll have to be ready to go right from the start,” Barty said.

“I have so many good memories from playing on Rod Laver Arena. It’s a beautiful court.

“Every experience I’ve had over the last 12 months will hopefully help me. We take all of the good memories from last year, but also understanding it’s a clean slate this year.”