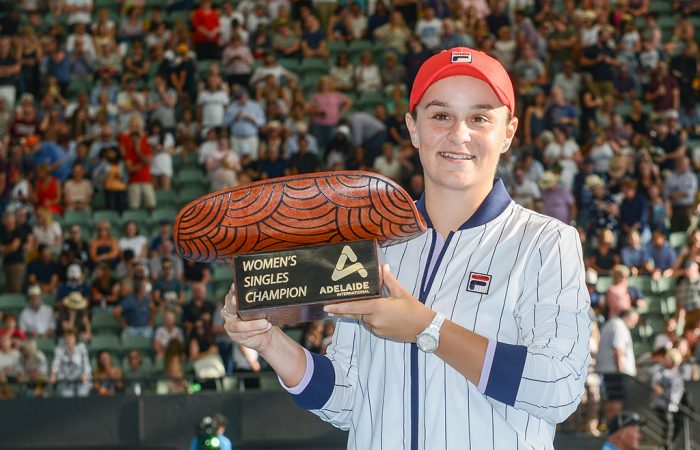 Australia’s Ash Barty has captured her first WTA title on home soil with an emphatic straight-sets victory in the Adelaide International final.

The world No.1 has downed world No.24 Ukrainian Dayana Yastremska 6-2 7-5 in Saturday’s final at Memorial Drive.

Barty had lost her two previous WTA finals in Australia – at the Sydney International last year and 2018.

But she produced a powerhouse performance to claim the inaugural Adelaide tournament, and eighth WTA title in her career.

“This is incredible … a great start to the year,” Barty said.

“It was nice to get the balling rolling this week … and I can’t wait to get started in Melbourne on Monday.”

The Queenslander went full throttle in her last tune-up for the Australian Open in Melbourne, rapidly establishing control against the 19-year-old Yastremska.

Barty conceded just two points on serve during a ruthless 30-minute opening set, while breaking her opponent’s serve in the third and seventh games.

Yastremska was overwhelmed by the Barty assault, making 14 unforced errors and serving three double-faults in the opening set.

The Ukrainian called a bathroom break at the end of the set, most likely in a bid to stall the momentum of Barty, who nonchalantly waited on her haunches against court fencing.

But the respite had scant instant impact.

Barty had four break points in Yastremska’s first game of the second set, and cashed in the last for a break and held serve for a 2-0 lead.

But Yastremska, when seemingly down for the count, rallied to win the next three games.

The visitor, leading 4-3, had two break points to extend her lead only for Barty to save both and square at 4-4.

Barty soon made the decisive move, breaking Yastremska to love to take a 6-5 advantage and then duly served out the final game for the title.