De Minaur out of Australian Open

A Grade 2 abdominal tear, sustained at the ATP Cup, has ruled a dejected Alex de Minaur out of Australian Open 2020. 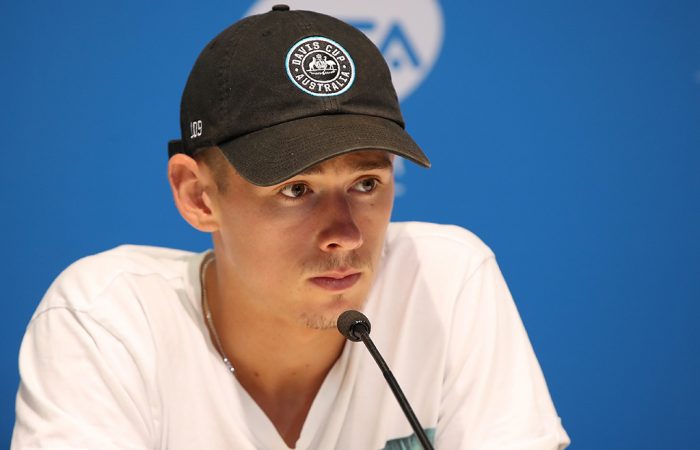 Alex de Minaur has been forced to withdraw from Australian Open 2020 with an abdominal tear.

The Australian men’s No.1 pulled out of this week’s Adelaide International with the same injury.

Last year, De Minaur advanced to the third round of the Australian Open before being stopped by Rafael Nadal at Rod Laver Arena.

“It’s not great. Not going to lie. Obviously it’s a week of the calendar that I really look forward to and put in all the hard work for, so it’s pretty devastating to miss out on my home Slam,” De Minaur said in a press conference on Thursday afternoon.

“I wanted to go out there and play, even though I’ve got a four-centimetre Grade 2 tear. So it’s not a joke – it’s something really serious.

“Getting out of bed hurts, everyday activity it hurts. So I was being optimistic, but obviously it wasn’t the case (to recover in time).

“Everyone was telling me not to play. It is the smartest thing.”

He notched thrilling three-set wins over higher-ranked foes Alexander Zverev and Denis Shapovalov – both times after trailing by a set at 4-2 – and then battled Dan Evans for three hours and 22 minutes before going down in three. After the Evans match he then teamed with Nick Kyrgios to win a compelling doubles match, a result helping Australia defeat Great Britain 2-1.

In the semifinals, he attained an incredible level to come within two games of upsetting world No.1 Nadal before the Spaniard recovered to win 4-6 7-5 6-1, in what was another physically-bruising encounter.

“I certainly prepared for the amount of tennis played,” De Minaur said.

“Going in you always knew it was going to be tough, especially looking at my schedule. I was playing Zverev in my first match of the year, Shapovalov, had some gruelling matches. But I didn’t expect to injure myself, that’s for sure.

“I gradually felt my first bit of pain during my Shapovalov match. After that took four days off, then played Evans in a very long match. Played the doubles, then a day off, then I played Rafa. During that I could feel something there. I didn’t think it was that bad.

“Then flew to Adelaide, got a scan, and the scan revealed that I had the tear, which is a quite significant one compared to other ones I’ve had in the past.

In 2018, after reaching the semifinals in Brisbane and the final in Sydney, De Minaur arrived at Melbourne Park and fell 6-3 3-6 6-0 6-1 to Tomas Berdych, hampered by the injury on his serve.

“The risks of me potentially playing … was that it could obviously get worse, get to sort of a Grade 3 tear, which involves stitches, and that means probably a problem for the rest of your career.

“It’s something to do with workload, especially because it only happens at the start of the year. And especially in the first weeks. After that I’m able to play throughout the whole year perfectly.

“So it’s something me and my team have got to look at. As tough as it is right now, I’ve got to learn from what’s happened and decide on different alternatives for next time.”

The 20-year-old said he planned to turn off his phone and steer clear of following the tournament.

“It’s gonna be pretty tough to hear about tennis,” he admitted.

“Even though it killed me, this is the right decision. Now I’ve just got to look at what’s ahead.”