Maddison Inglis set to take the next step in 2020

Having risen to within striking distance of the top 100 in 2019, 22-year-old Maddison Inglis is looking to continue her rise -- beginning with Australian Open qualifying. 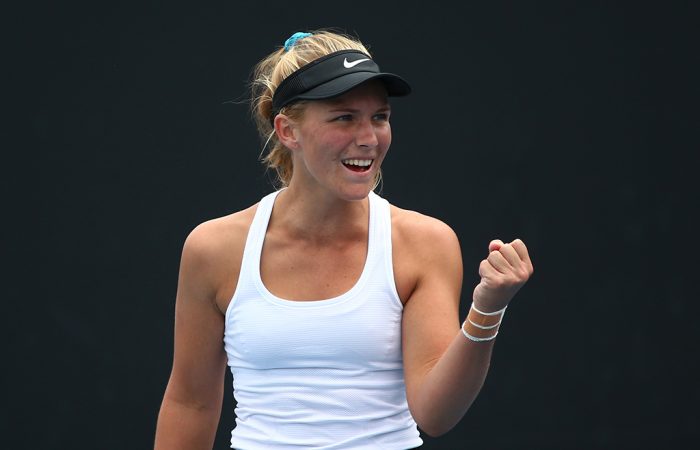 Seeded 21st in qualifying, Inglis embarked on her 2020 season after a career-best year in 2019 during which she compiled an incredible 61-22 win-loss record and won three ITF titles.

We caught up with the West Australian in December as she took part in Tennis Australia’s WTA training camp at Melbourne Park in preparation for an even bigger year in 2020.

Tennis.com.au: Talk us through your 2019 season. What clicked?

“I made the move to Brisbane this year, to train. I think making that move has helped me in kind of having a base. At the end of a trip I know where I’m going to and I know I have people to talk to. I have Chris Mahoney as my coach to direct me and (with) schedules and obviously everything on court.”

How did those factors, or improvement to your set-up, help your tennis?

“I keep talking about what the big difference is and I keep thinking about it, but I think probably one of the most important things was having Kaylah McPhee on the road with me. Because we spent a lot of weeks together on the road, alone, and we kind of kept each other happy, supported each other, which I think was a huge thing. So I’m really grateful to have her as a friend and it’s been cool to see us both rise. I’m living with her in Brisbane — we spend a lot of time together. we haven’t gotten sick of each other yet (laughter).”

Why did you choose to move away from Perth?

“Perth is just so hard to get to; so hard and so expensive. I know my family’s there and obviously I had really good coaches and support, but it was just too hard for me to get to, and there probably weren’t enough girls to hit with. So I think being in Brisbane, there’s five of us I think, and we’re all the same age and really good friends. So it’s really awesome, and I’m really enjoying it. So I think maybe that’s why I’ve been doing a little better, because I’ve found a good balance of training and playing hard, but also being happy, and enjoying it.”

“I had a little conversation with my old coach Andrew Roberts at the start of 2019, and he said, you’re going to have to commit to somewhere. You can’t just keep being up in the air and like going here and going there. He said, let’s email Chris Mahony and see what he can do. Chris has been so good — I’m really lucky to be working with him. So me, Kaylah, Chris and our S&C coach Dan, we’re kind of a little team, and it’s really nice. Chris just kind of took me in, and I’ve been working with him ever since, which has been really awesome. And hopefully it can keep going (laughter).

“My boyfriend Jason (Kubler) lives in Brisbane, I’d spent a little bit of time there, but never really locked in that’s where I’m going to train. This year in maybe March, I was like, I really want to train here. I’m loving it.”

You talked about gaining confidence from playing lots of matches. And you did in 2019 — not many players won more than 60 singles matches in the season. How did you pull up physically from that workload?

“I haven’t really had any injuries that have put me out for long at all, so I’ve been really lucky. I think it’s just finding a balance between, if you have a big few weeks, taking a week off and recovering, and going again. Or taking a few weeks off. So I think I’ve done that really well this year. I’ve been match fit, I guess — it’s been going really well.”

What were the highlights of 2019 for you?

“One of my big goals actually was to crack top 200. When I did that I was really happy. And then I set a new one for top 150, and I remember when I won the match to get into there I was so nervous … that was in the Toowoomba Pro Tour final. I know I didn’t have to do it in that match, but I was like, ‘just do it!’ Like this could be your only chance. I was so nervous and when I did that I was just so relieved and really proud of myself.”

Now that you’re ranking is higher, how have you found the level once new scheduling opportunities have opened up for you?

“25s are one of the lower (level of) tournaments, but a lot of higher (ranked) girls still play them. Even a few top 100 girls play them. So I’ve been playing good players in those. And then playing the higher (level events) obviously there’s a few better players, which has been really good. I don’t think it really matters who you play — I think it’s just how you feel and how confident you are against them. So I think with the matches that I’ve played, and won, I’ve kind of just built confidence. I don’t think there’s much difference — there’s only little things — between maybe where I am and top 100. There’s still a long way to go until the next level, but yeah, probably just confidence going into those matches has helped a lot.”

Your first breakthrough came when you won the Australian Open Play-off as a teenager back in December 2015. How have you changed as a player between then and now?

“I think I’ve changed a lot, even since the start of this year. A few of the coaches have said, like, just so many things are different. How I am mentally on the court, and how I am moving — everyone says I’m a lit quicker. Just little stuff like that. Obviously this year I’ve been trying to get a lot better at a few things. And I’ve been working really hard in the gym, on running and fitness. It’s obviously paying off. I’ve had a routine, of having enough time on court and enough time in the gym, being match fit. So it all kind of comes together and I just feel like I’ve got a good little set-up. I do feel a lot more agile and fit and like I can be out there for a few hours. It’s a really good feeling.”

With your ranking where it is now, what does 2020 look like for you?

“Being at this ranking at this time is really exciting — I’ve never been straight into AO qualies on my own (ranking), which is really exciting, and I’m really happy about it. (After the AO I’m going) to Tasmania for a couple of tournaments, then hopefully over to the US. It depends on my ranking, but hopefully I’ll play Indian Wells and Miami qualifying.

“(So far) I’ve kind of just stayed at the lower (level events) because as I said I like matches and I play my best with matches. and the lower tournaments still have such good points … if you do well in those you don’t really need to go up. But obviously it’s important to play better players. So I’m trying to transition up there at the moment. So we’ll see how the first few months go.”